Our regional leagues and conferences, which we propose in lieu of a radical baseball realignment that would obliterate the American and National Leagues in all but name, show some fascinating results. These aren't your father's baseball standings. 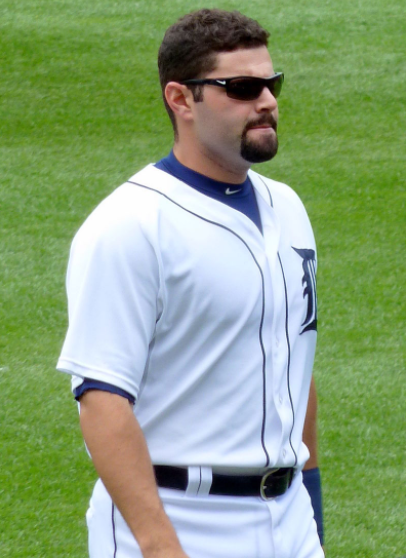 We're looking at the Major League Baseball standings and ... try to keep your eyes open.

Over here, the Houston Astros lead the American League West by seven games. Over there, the Washington Nationals have a 7½-game lead on the Atlanta Braves in the National League East.

But, you say, look at the National League West. Torrid race there. The Dodgers, Colorado Rockies and Arizona Diamondbacks all are really ripping it up with three of the seven best records in baseball. That should be a hot one.

Except, it isn't a hot one because it doesn't really matter. Under the present playoff arrangements, all three would go to the postseason today, at no real great advantage for the division winner over one of the other two clubs. Those other two clubs would meet in a one-game playoff, one wins and the other loses, but the winner continues on about the same footing as the division champion.

It's the same problem every year. The lords keep fooling with stop watches and pitch clocks, which, at least, distract them from baseball-hating ideas like starting extra innings with a runner on second base or that ill-advised float from back when about making defensive shifts illegal. Meanwhile, one's loudest snore as a baseball fan issues from the broken connection between 162 games and the World Championship, along with insufferably boring playoff races that reduce us to seeing which clubs can nudge themselves to a couple more than 85 wins to nab that last wild card before outlasting better teams through the World Series.

The only way for a World Series game to attract television audiences that were common before expanded playoffs is to put on an event like Game 7 of the 2017 World Series between the Chicago Cubs and the Cleveland Indians, in which somebody was going to win it for the first time in more than 60 years.

Every few years, the notion of realignment is raised as a cure for what ails baseball. The proposals usually are monstrous, amounting to the abolition of the American and National Leagues in all but name, favoring regional "leagues" that would obliterate the few remaining traditions and make baseball less different than ever from pro hockey and pro basketball.

But the American and National Leagues include one feature what no other league can claim – rivalries that are well more than a century old. Ripping them apart is an unnecessary and destructive approach. Baseball by now has all but erased most of its history. Who even cares anymore about home run records and milestones?  New measurements pepper the popular imagination. Why would a game that brags about tradition eliminate that one remaining historical thread?

One such idea, proposed here, plays out three regional leagues overlaid on the two nationwide leagues. It makes some sense to follow it during those years when the interleague schedule pits AL East vs. NL East, AL Central vs. NL Central and AL West vs. NL West. That was the arrangement in 2015, so we followed those proposed leagues during that season. Here are the results in 2015 for the East League, the Central League and the West League.

We made another proposal last season to divide the big league teams into regional quadrants and use those quadrants as the basis for four regional leagues. We played that out last season. Here is a longer explanation and how it played out in 2016.

Without further prologue, how are those races looking in 2017? We begin with the quadrants, which we now will call "conferences." Through May 24, they look like this. 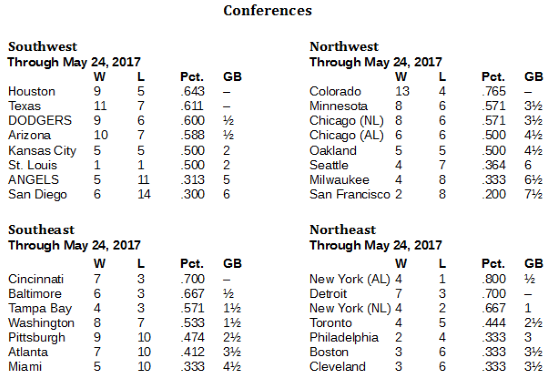 Working with the schedule baseball gives us, we see some imbalances here, but they can easily be corrected by scheduling. We also see some interesting standings. These conference standings account only for the games each club plays within its conference.

Notice that the Astros and Nationals aren't so dominant in the Southwest Conference. The Astros are tied on top with the Texas Rangers and barely ahead of the Dodgers and Diamondbacks, who are both one-half game down.

Where are the Nationals? Well, they're not leading the Southeast Conference by seven games. They're in fourth place. In first place, the Cincinnati Reds. Imagine that. On top of the Northeast Conference, we find the Detroit Tigers. Neither the Reds nor the Tigers are in playoff position by dint of the actual Major League standings.

We say, get rid of wild cards and replace them with champions. Overlay regional conferences to determine those additional champions.

Again, rather interesting. In addition to following these races for their own sake, they also give us another perspective on how each club is performing across the big leagues.

The South League is a bit of a different story.

We have a couple of real races in this configuration. In the West, it's the Astros, Dodgers and St. Louis Cardinals. In the East, it's the Reds and Nationals.

You see what's happening here. Divide the country into four regional conferences, overlay those conferences into regional leagues, and each conference is simultaneously three distinctive playoff races. So, each team is campaigning in three different competitions, in addition to its official big league playoff race.

Next, each team plays two teams per year from its "crossover" conference twice each, home and home, and rotate those pairings over four years. The crossover conferences are the pairings that don't figure in regional leagues. That would be Southwest vs. Northeast and Northwest vs. Southeast. Notice, these are, in the extreme cases, the longest trips. Now, your clubs are taking those trips once every four years.

Now, you've got a 140-game regular season schedule, reasonably balanced, certainly no worse than the present arrangements and better in a lot of ways. You can add a couple of off days and still shorten the regular season by three weeks.

At the end of it, around September 7, begin a grand tournament with all of the champions and only the champions. Using all of the divisions proposed here, along with the traditional American and National Leagues with their divisional alignments, each club begins the season with four gates of entry.

Inevitably, some clubs will win multiple championships. Fine. Seed those clubs on top. We now have 18 divisions (conferences included) from which to pluck champions. No need to have so many wild cards, if any. There's more to be worked out here, but this is a start.

If your goals include shortening the regular season, intensifying regional rivalries across the land, realigning while simultaneously preserving the American and National Leagues, eliminating wild cards, reducing travel, having more games in local time zones, strengthening the regular season and tightening the connection between that season and the championship, this is a good path.

Let's look at the other two regional leagues. First, the East League.

Imagine a league in which the division leaders are the Reds and the Tigers. We don't have to. We have the East League. It's not in the bag for either team, obviously.

And the North League.

Rather likewise, the Toronto Blue Jays are last place in the AL East and terrible in the East League, but they're right there in the North League.

It's all about who you play and how well you play them. But it's also about which games count and how. By dividing up the teams as we propose, we make those matters matter more, and give more clubs more chances by doing it. All without ridding ourselves of the one traditional entity baseball has left to keep, which is the American and National Leagues.