The Nashville Predators finished the regular hockey season poorly, consigning themselves to the Second Division next season. Also being demoted are the New York Rangers. 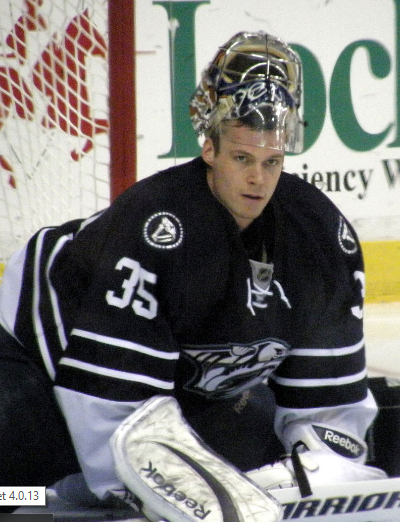 Pekka Rinne is helping the Nashville Predators through the Stanley Cup Playoffs. But the Predators still are going to the Second Division next season (Dan4th Nicholas/Creative Commons Attribution 2.0 Generic license).

The regular season is one thing, and the Stanley Cup Playoffs are quite something else.

Consider the Nashville Predators, who ended the 2016-17 regular season in a slide, losing five of their last seven games. Now, they are cruising through the Stanley Cup Playoffs, holding a 3-1 lead in the Western Conference semifinals against the St. Louis Blues in games played through May 2.

Unfortunately for the Predators, the playoffs don't count in the hockey standings for the ordinal divisions with promotion and relegation. It happens that two of those ending regular season losses came against the Blues and the New York Islanders in the First Division.

The other team being relegated next year from the First Division, the New York Rangers, remain alive in the Eastern Conference semifinals, trailing the Ottawa Senators, 2-1, through May 2. 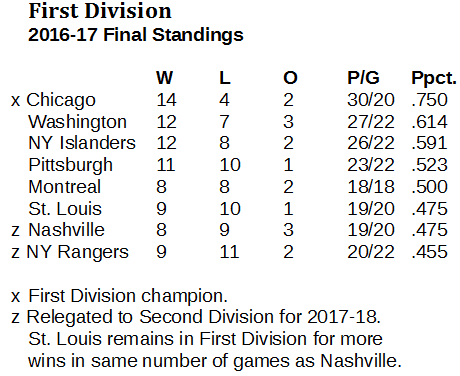 The Chicago Blackhawks repeated as First Division champions, and even exceeded their title performance of 2015-16. Playing as well as they have against this top level of competition, the Blackhawks have done a lot right during the regular season the last two years. But in neither year have they done anything right in the playoffs, losing in the first round both times.

As expected, the Ducks and Columbus Blue Jackets will be promoted from the Second Division to the First Division in 2017-18 as the top two teams during the regular season just concluded.

The Winnipeg Jets rallied from the bottom of the Second Division, winning their final three games of the regular season in that tier. But that wasn't enough for them to overtake Ottawa and move into sixth place. So, the Jets, along with the last-place Detroit Red Wings, are going down to the Third Division in 2017-18. 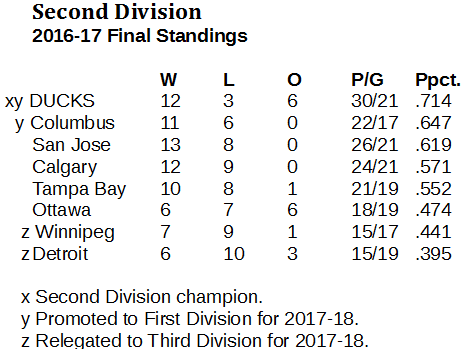 An outstanding race for promotion from the Third Division commenced in the final days of the regular season, with the Minnesota Wild, the New Jersey Devils and the Vancouver Canucks all within a mere 20 percentage points of each other with two weeks left.

But the Wild answered that call the best, winning their final two games in the division to take second place and the promotion. The Boston Bruins, the relatively easy winner of the Third Division, will be promoted with the Wild to the Second Division next year. 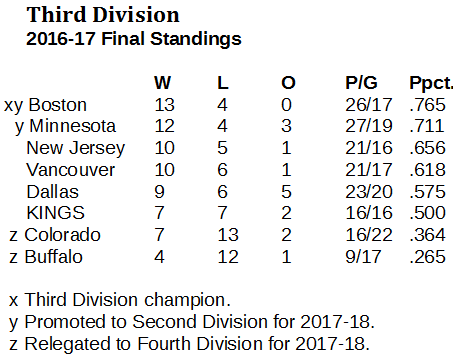 There was no such drama at the bottom of the Third Division. The Colorado Avalanche and the Buffalo Sabres, easily the worst teams at this level, are sinking to the Fourth Division in 2017-18.

In the Fourth Division this year, the Philadelphia Flyers went to the final day of the regular season with a chance to move into second place and promotion to the Third Division next season. However, the Flyers fell to the Carolina Hurricanes, 4-3, in a shootout. 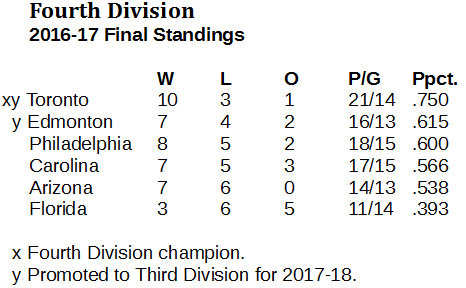 With that, the Flyers finished in third place, behind the second-place Edmonton Oilers. The Toronto Maple Leafs were the easy winners of the Fourth Division. They will be promoted to the Third Division in 2017-18, along with the Oilers.