The Minnesota Wild won early and just often enough to secure Team of the Year for the western pro hockey traveling championship in 2016-17. Following close behind were the Ducks and the Winnipeg Jets. 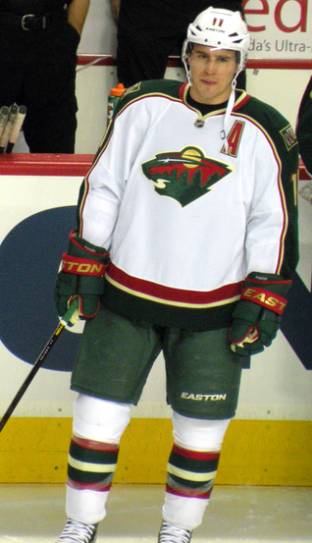 Zach Parise was one of the top performers for the Minnesota Wild, who won the western pro hockey traveling championship in 2016-17 (Resolute/Creative Commons Attribution-Share Alike 3.0 Unported license).

The Minnesota Wild came out scoring in bunches once play started for the western traveling championship in pro hockey for 2016-17.

Then, suddenly, the scoring stopped. But the Wild still worked up a good enough start to nose through with the Team of the Year designation in a year that saw no dominating performances.

Unlike last season, when the Ducks and the Winnipeg Jets each won at least 10 games with the western traveler, the competition played out much more evenly in 2016-17.

The Ducks, who rallied big for the title last season, had a similar opportunity this year. After winning the title on March 15 with a road win against the St. Louis Blues, the Ducks defended the prize four times, finally losing in Winnipeg, 4-3, in overtime on March 30.

The Ducks actually were dual champions entering that game, having won the continental traveling championship with a 4-3 home ice win against the Edmonton Oilers on March 22 and taking three defenses of that title into the March 30 win in Winnipeg.

With the Winnipeg victory on March 30, though, the Jets took over both titles and closed out the season with two wins in the West. Thus, the Jets will begin 2017-18 with the western and continental traveling championships. If the Ducks had won that game in Winnipeg and won out to end their season, they would have surpassed Minnesota in the final standings. Instead, the Wild held on for Team of the Year.

Winnipeg also ended the 2015-16 season with the western championship, putting it on the line for the first time this past season on Oct. 15 in Minnesota against the Wild.

But after scoring 14 goals in their first three games playing for the western traveler, the Wild went on the road and lost, 1-0, to the Colorado Avalanche on Nov. 5. Thus, the western traveling championship was set on its path through the season.

The Wild won another title with a 3-1 win at home against the Jets on Nov. 23, but failed to defend it. The Wild's third western championship of the year came with a 3-2 shootout win at Dallas on Jan. 24. The Wild defended that title twice.

Minnesota never played for the western traveling championship during the final two months of the season, but they accrued enough margin by then to hold off the late run for it by the Ducks. 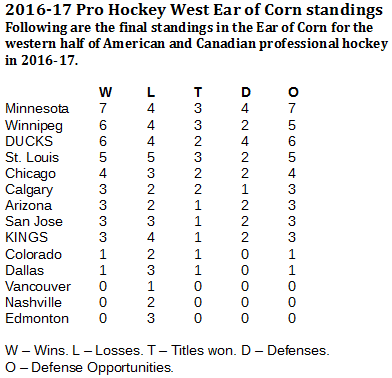 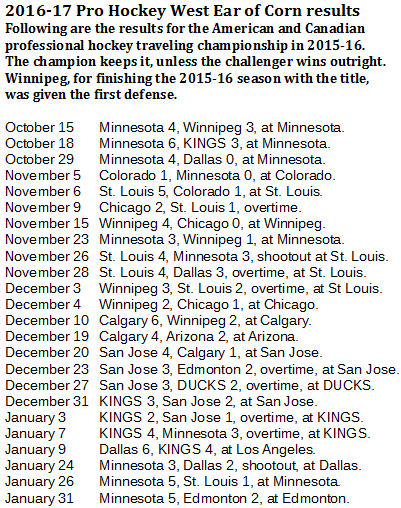 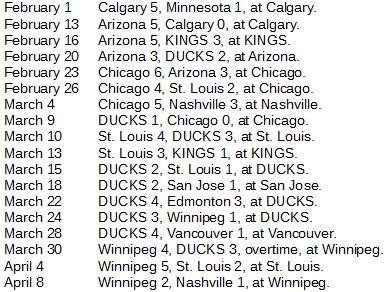