With wins in its first four games this season, Clemson is approaching the school record for the college football traveling championship as it climbs the national historic standings. 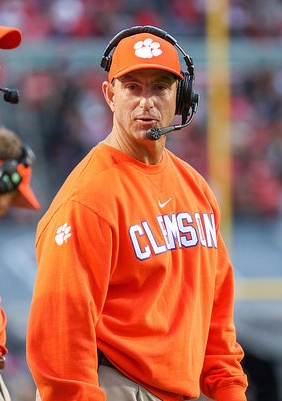 Clemson is approaching school history with the traveling championship in college football.

And history says Clemson will make it.

The Tigers have begun the 2017 season with four consecutive victories after winning the traveling championship in the National Championship Game earlier this year. Clemson's most recent victory for the traveling title was a 34-7 win against Boston College at home on Sept. 23.

The longest title defense ever for Clemson is five games, which occurred during the 2011 season.

Considering the Clemson is going to Blacksburg, VA, Saturday to take on Virginia Tech, the 2011 season has particular resonance.

That year, Clemson defeated Virginia Tech not once, but twice for the traveling title. And it still was the best year Virginia Tech ever has had in this competition.

(Click here for the all-time results in the college football national traveling championship.)

The Tigers took the traveling title away from Auburn with a 38-24 win at Clemson on Sept. 17, 2011. Their second victory in the five-game defense streak was a 23-3 win at Virginia Tech on Oct. 3.

But Virginia Tech would see daylight for the national traveler later that season. Entering a Nov. 10 game at home against Georgia Tech with an 0-10 record all-time for the traveling championship, the Hokies notched a 37-26 win at home to nab it for the first time. Georgia Tech had taken the title from Clemson with a 31-7 win in Atlanta on Oct. 29.

Virginia Tech defended the title twice before facing Clemson in the Atlantic Coast Conference Championship Game on Dec. 3 in Charlotte, NC. There, Clemson took the title back from Virginia Tech with a 38-10 victory.

And that turned out to be an oddly fated result in the traveling championship. At the Orange Bowl on Jan. 4, 2012, West Virginia demolished Clemson, 70-33.

That happened to be the last game for West Virginia as a Big East football program. The Mountaineers took the title with them to the Big 12 in 2012, and the title would remain in that league until a little more than one year ago, when Arkansas took down Texas Christian, 41-38 in two overtimes, on Sept. 10, 2016, in Fort Worth, TX.

With that result, the traveling title returned to the Southeastern Conference for the first time since Clemson beat Auburn in their 2011 meeting. Of course, Clemson put the traveler back in the Atlantic Coast Conference with its 35-31 win against Alabama in the national championship contest this past Jan. 9 in Tampa.

So, it has all come back around in a bit of a circle to that 2011 season with Clemson putting the title on the line Saturday against Virginia Tech.

With its five straight victories, which include four title defenses, Clemson is moving up the all-time standings with a 15-5 record and a .750 winning percentage.

Only 10 schools in the 39-year history of the traveling championship have won more than 15 games. Ohio State is tenth on the list with 17 victories.

A win against Virginia Tech Saturday would make Clemson 16-5 all time, giving it a .761 winning percentage to move into seventh place historically. Virginia Tech is 3-11 all-time for the traveling championship, including a 2-2 mark in Blacksburg.

Clemson is 3-0 all-time in games against Virginia Tech for the traveling title. In addition to the two wins in 2011, Clemson also defeated the Hokies, 40-7, on Sept. 3, 1988, its first title defense after winning it for the first time with a 35-10 win against Penn State in the Florida Citrus Bowl on Jan. 1, 1987, in Orlando. 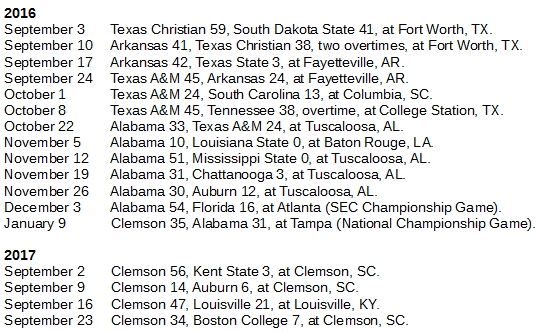