It's never happened like this before in eight years of following promotion and relegation across professional baseball. The top two clubs in each division at the end of the regular season are going to the playoffs. Which doesn't mean the titles are decided. 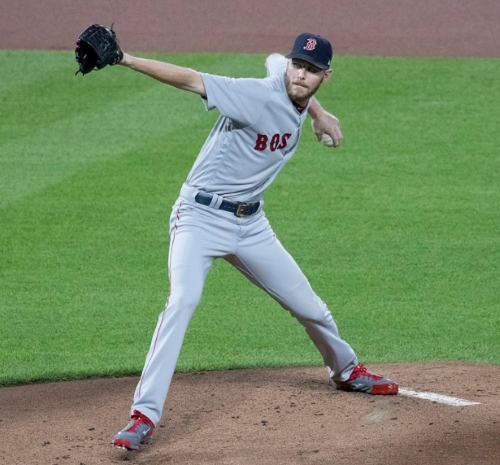 It isn't all settled, yet, but this much we know: for the first time since we began following promotion and relegation in baseball – and this is the eighth year of it – the top two clubs in each division at the end of the regular season also are going to the playoffs.

And in the First Division, which should expect to have the best clubs, the top four clubs will last into October.

So, it isn't all settled. The championship in each division remains open. There remain some decisions in the bottom of the Third Division as to which clubs will survive and which clubs will be banished to the Fourth Division next year.

But it's mostly settled. 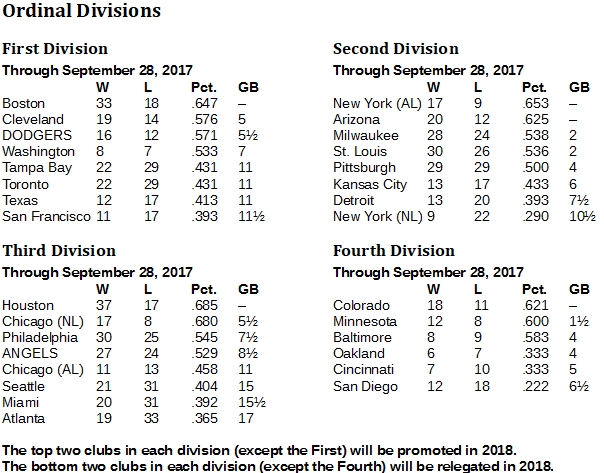 The championships in each division remain open because, in baseball, we count the postseason. The other sports with promotion and relegation – pro basketball and pro hockey – play reasonably balanced schedules throughout the season, so there's little reason to upset that balance by including the playoffs, while the baseball schedule is so imbalanced that including the playoffs doesn't hurt anything.

So, we look at the First Division and find the Boston Red Sox comfortably on top, as they have been for most of the season. However, these decisions are made by winning percentages, and it remains that the Dodgers, the Cleveland Indians or the Washington Nationals could still pass them.

The Indians and Red Sox will meet in the American League Championship Series (ALCS) if the Red Sox win their divisional series with the Houston Astros and the Indians win their game against the AL wild card survivor.

And any World Series combination involving the Dodgers, Nationals, Red Sox and Indians will count in the First Division.

So, who's the winner? We won't know for a while. And it could be fun to find out. Last year, the First Division came through quite a tangled web in the postseason, with the Dodgers prevailing for the very first time. The top five First Division club all were in the playoffs.

And who are the losers? That, we do know. They are the bottom two clubs – the Texas Rangers and the San Francisco Giants – both of which will be relegated to the Second Division in 2018.

The results from the last week weighed heavily on that decision. The Giants lost two of three at home to the Dodgers Sept. 22-24, enough losses to drive them into the basement. With one more win against the Dodgers, the Giants would be 12-16 instead of 11-17. The difference is huge – the difference between .429 and .393 in winning percentage.

The Tampa Bay Rays, (22-29, .431) have been sweating all of this out ever since losing two of three at home against the Red Sox Sept. 15-17 to end their First Division schedule. But they survived, which would not be the case if the Giants had swept the Dodgers and the Jays had swept the Sox. The Rays remain the longest continuous member of the First Division actively and they will become the longest continuing member all-time.

The Rays won promotion to the First Division for the 2011 season and have stayed there ever since. So, the 2018 season will be Tampa Bay's eighth straight in the top tier. However, they barely hung on this time.

The St. Louis Cardinals had been the record holder, playing for seven straight years in the First Division, starting as a charter member of the top tier in 2010 and continuing until they were relegated to the Second Division for the 2017 season, giving them seven straight seasons at the highest level.

The championship in the Second Division this year remains up for grabs. The New York Yankees (17-9, .653) and the Arizona Diamondbacks (20-12, .625) are right at each other on top, even in the games column and with the Yankees in the percentage points lead. Conceivably, though it isn't likely, the Yankees and Diamondbacks could meet in the World Series.

At the bottom of the Second Division, the Royals settled the matter by winning two of three at home this week against the Detroit Tigers. The Tigers needed to win two against Kansas City and they needed the Royals to lose three against Arizona in order to escape relegation.  The best Detroit can hope for now is that an Arizona sweep of Kansas City brings the Tigers and Royals both in at 13-20, but the Royals hold the tiebreaker by winning 11 of 18 between them this season. So, the Tigers are going down to the Third Division, as are the New York Mets.

Coming up to the Second Division from the Third Division, we already know, are the Houston Astros and the Chicago Cubs. Again, those clubs could meet in the World Series to change the order between them, though it isn't likely. The Astros are the first-place club by percentage points.

The lower half of the Third Division is where it gets interesting. The Chicago White Sox ensured they won't be relegated with a 5-4 win against the Angels Thursday night. So, it's between the Seattle Mariners, the Miami Marlins and the Atlanta Braves. Two of those club are going down to the Fourth Division. The decision will come during the weekend.

The Braves and Marlins are playing a four-game series in Miami. The Marlins won the opener, 7-1, Thursday night. The Mariners are playing three at home against the Angels. The Mariners, Marlins and Braves all remain so close at the bottom that anything could still happen between them.

In the Fourth Division, we have two more playoff teams on top – the Colorado Rockies and the Minnesota Twins. Each club is the last in its league to enter the playoffs as the second wild card.