The Angels all but had Team of the Year for the American League traveling championship clinched, but the New York Yankees got their mitts on it, then produced a torrid September to prevail. 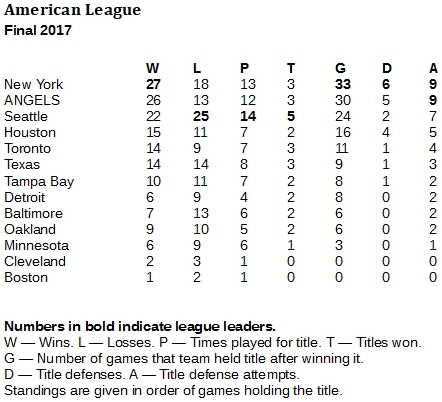 The American League (AL) traveling championship raised two questions, which amounted to one: Did the New York Yankees win it? Or did the Angels lose it?

On the morning of Sept. 3, the Angels were a lusty 26-12 for the AL traveler, winning it three times,  defending it five times in eight tries and holding 30 games of title defense. They were tied, 1-1, against the Texas Rangers in Arlington with the rubber game of their three-game series coming up that day. A win would allow the Angels to take the prize with them to Oakland and, maybe, later, to Seattle.

Only the Seattle Mariners were making any kind of claim to contest the Angels for the season title. Despite leading all AL clubs with five titles, though, the Mariners were only 22-25 for the prize, succeeding only twice in seven defenses.

We'll never know if a win for the Angels on Sept. 3 would have sealed the season title or not. Anyway, it didn't happen. The Rangers won that day, 7-6. The Angels staged a furious three-run rally in the ninth to come in a run short. Turned out to be their dying gasp.

The problem was that the Rangers had the New York Yankees as their next AL opponent after taking a weekend detour in the National League against the Atlanta Braves. And the Yankees, unlike the Angels, Rangers or Mariners, were in the playoff hunt.

The Yankees were 8-6 in the AL traveler with one title at that point. But they wanted the September games the most, and they won them. First, they won two of three against the Rangers to gain the championship for the first time since Aug. 2. They followed with consecutive defenses against the Tampa Bay Rays, Baltimore Orioles and Minnesota Twins.

There, the Yankees reclaimed the crown with two wins in three games to end the regular season and take the prize into the playoffs. A one-game playoff win against the Twins preceded a five-game win in the American League Division Series (ALDS) against the Cleveland Indians. The Houston Astros claimed the prize from the Yankees with a seven-game win in the American League Championship Series, but the Yankees were in by then with the traveling championship for the season.

The Yankees did a season's worth in September, winning the title twice and making five defenses in seven tries for a 19-11 overall record and 26 games of title defense. 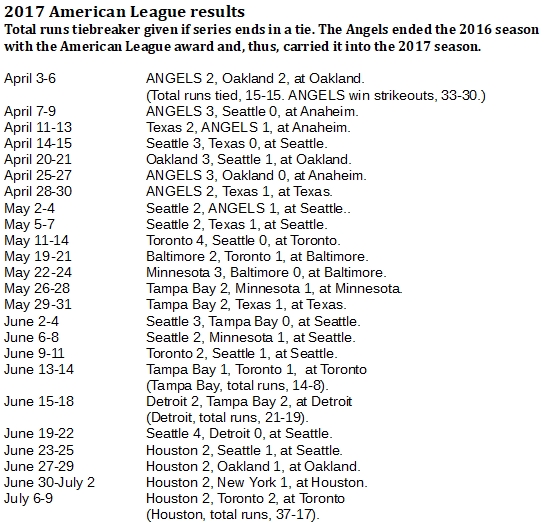 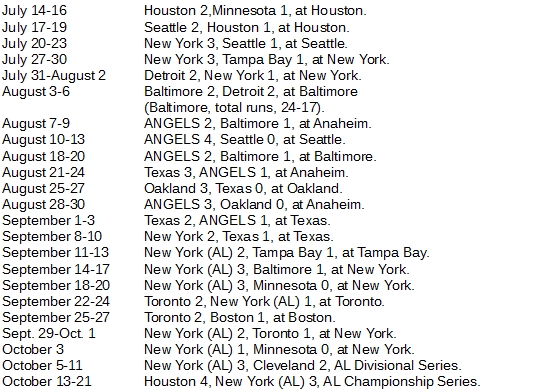