There were some late twists of fate in favor of the Colorado Avalanche, who claimed the western traveling hockey championship in 2017-18 with a key, late win. 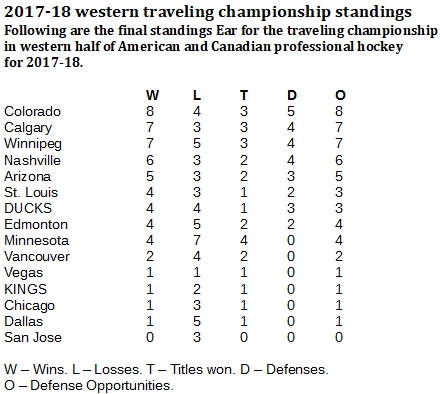 Three seasons into the western traveling hockey championship, the Winnipeg Jets are the all-time leader, even though they have yet to capture the championship for any one season.

The Jets again finished high and off the top in 2017-18 with seven championship victories to tie for second with the Calgary Flames behind this year's winner, the Colorado Avalanche with eight.

The key game of the season might have been a 3-2 overtime win at home for the Avs against the Jets, who already were aiming for their fifth title win of the year. The win gave Colorado its first championship of the season. The Avalanche defended this one four times and pulled into a quick tie on top with Calgary at five total.

Then, again, the key game may have been on Feb. 28, when the Avs hung a 5-2 win on home ice against the Flames, who were going for their eighth title win of the year. Following that victory, Colorado notched one defense to tie the Flames at the top with seven wins.

The Jets had an opportunity to break the championship in their favor by beating the Chicago Blacks Hawks on March 29, but the the home standing Hawks produced their only western traveler win in four tries for the year, a 6-2 drubbing. Next up for the Hawks: a flight to Denver for a game the next evening against the Avalanche.

Colorado couldn't, and didn't pass up this chance, producing a 5-0 win against Chicago and securing its eighth championship win of the year. It was just enough. The Ducks took it from Colorado right away with a 4-3 overtime win in Anaheim on April 1.

But no contenders were among the Ducks' remaining three games, all of which they won to bring themselves up to their only four wins for the year.

It wasn't for absolutely nothing. The four wins brought the Ducks all-time up to 22 wins, second all-time to the Jets (23) for the western hockey traveling title. 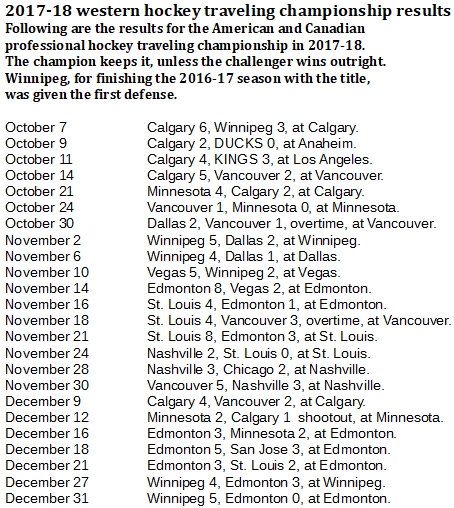 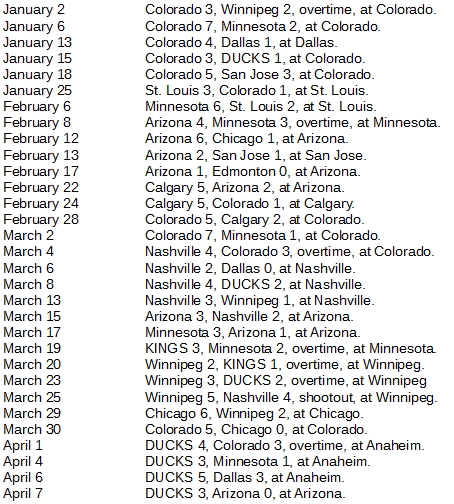