PSV Eindhoven put together a late rally, but it wasn't enough to catch Feyenoord Rotterdam for Team of the Year in 2016-17, the first year of the Dutch traveling soccer championship. 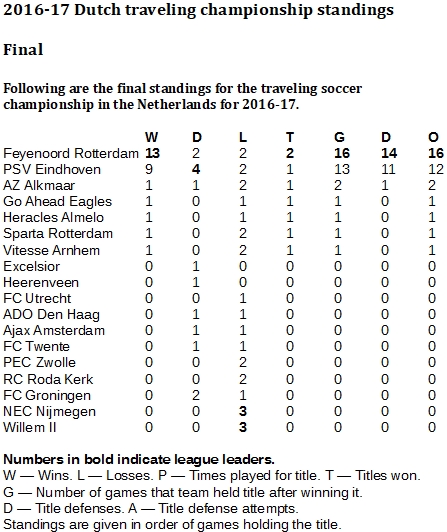 We began the Dutch traveling championship in 2016-17 by placing it in the care of PSV Eindhoven, the Erdivisie champion in 2015-16.

But the better team in the traveling title through the year proved to be Feyenoord Rotterdam. Taking the title from PSV with on Sept. 18 with a 1-0 win on the road, Feyenoord held it for most of the next five months. After losing, 1-0, at Go Ahead Eagles on Nov. 6, Feyenoord regained the championship with a 4-0 win at AZ Alkmaar on Dec. 11.

Feyenoord finally lost the title again, this time to crosstown rival Sparta Rotterdam, 1-0, at the road site, on March 5. PSV Eindhoven won the title with a 1-0 win at home against Vitesse Arnhem on March 18 and held it for the rest of the season, finishing the year with a title, 11 games of title defense and possession entering 2017-18.

But Feyenoord Rotterdam already was in the clubhouse with its two championships and 14 games of defense. Feyenoord gets the first Team of the Year nod. 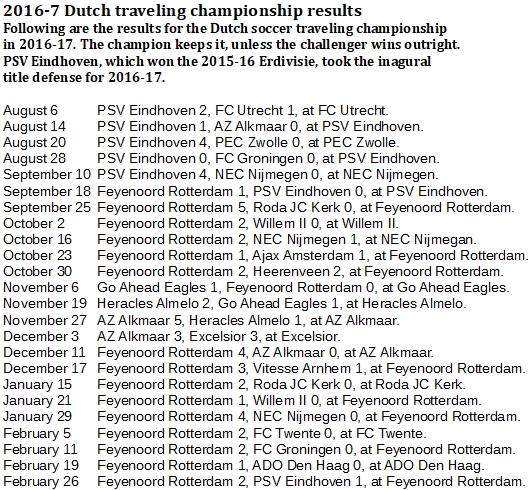