The Pittsburgh Penguins did what a hockey team must do with the traveling championship: Win it first, because you're not keeping it for long, anyway. 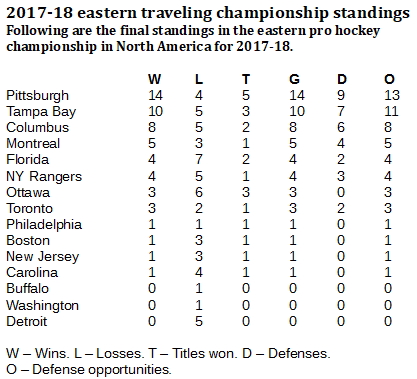 The key to traveling championship glory in any sport is simply to get started. Answer the challenge. Win it when it is out there.
It's perhaps a little more key in hockey, where titles are harder to defend than in any other sport. It is rare for a team to hold a traveling title for more than five or six games in any of these hockey lineals. So, missing a challenge is a lost opportunity, and it becomes especially important to cash those opportunities because each championship is likely to be short-lived.
The Pittsburgh Penguins demonstrated this in the eastern lineal championship campaign for 2017-18, winning all five of their challenges. It amounted to 14 games of championship, which was easily the most of any team. There aren't many sports around the world that we track here that will require five championships to amass 14 games.
In three years of tracking this traveler through the eastern half of big-league hockey, the Penguins have been much better as a challenger than as a title defender, and they're better than most as a defender. As a challenger, the Penguins are 9-2, while they are 16-8 as a defender. Across the east during those three years, 98 out of 168 title defenses have been successful (58.33 percent).
The Penguins shot to the top of the all-time standings through three seasons, now with 25 games of the championship, passing the Florida Panthers, who have 22. Columbus is in third place with 19 games, followed by Tampa Bay (17) and Washington (15).
In addition to leading all teams in this chase with 14 games of the championship for 2017-18, the Penguins also won the last live title of the season, and so took it to the start of the 2018-19 season.
Tampa Bay finished with 10 games for second place in 2017-18, followed by Columbus with eight and Montreal with five. In contrast to the Penguins, the Florida Panthers failed five challenges. They did win two, but that got them four games of championship, tied with the New York Rangers. 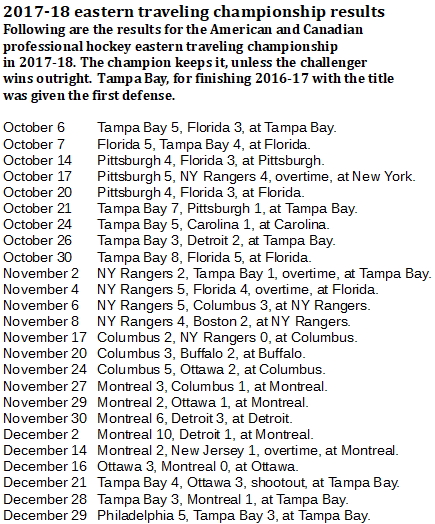 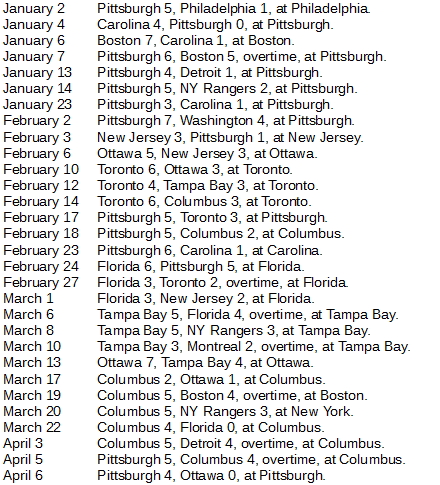