Paris Saint-Germain no longer is just a worthy place-holder for the French traveling soccer championship. After attempting more than 30 title defenses in the step role, PSV won a title on its own in 2016-17 and followed with another sterling defense. 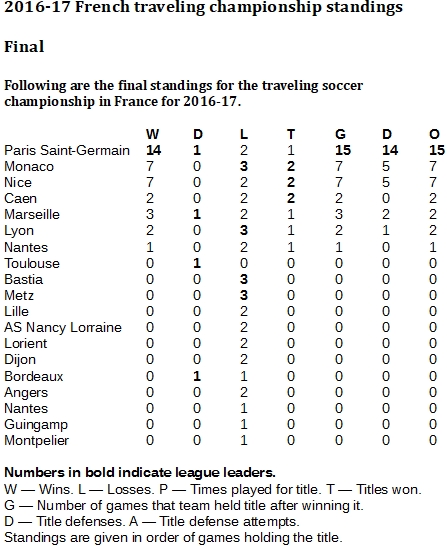 It can't be disputed that Paris Saint-Germain (PSG) is the leading French soccer team of this decade, and that's consistent with how the first two years of the French traveling championship have unfurled.

Of course, the championship has to begin somewhere, and we started it with PSG in 2015 after it won Ligue 1 in 2014-15. PSG then beat all comers and then some with a 27-game inaugurating defense that included 23 wins. Lyon finally took it away with a 2-1 win at home on Feb. 28, then held it until the last game of the season.

Unfortunately, the new champion, Stade de Reims, did not escape relegation despite ending the campaign with that 4-1 win at home against Leon. Because Reims could not defend the title, it went at the start of 2016-17 to PSG for its dominant performance as Team of the Year.

So, PSG began the second year of this competition defending the championship for the second time despite never having won it. Monaco put the prize back into circulation with a 3-1 at home against PSG on Aug. 28. Over the next five months, eight different teams would hold the title.

But that eighth was PSG, winning its own championship for the very first time after defending it 31 times, 29 of them successfully. PSG defeated Nantes, 2-0, at Nantes on Jan. 21 for its first title. Then, the Parisian club tacked up 12 defenses, 11 of them victories, before losing, 3-1, at Nice, on April 30.

Marseille nabbed the championship from Nice a week later and held it until the end of the season. But PSG had struck.

With 14 victories in the traveling championship, PSG had twice as many as any other team. That's Team of the Year. Again. 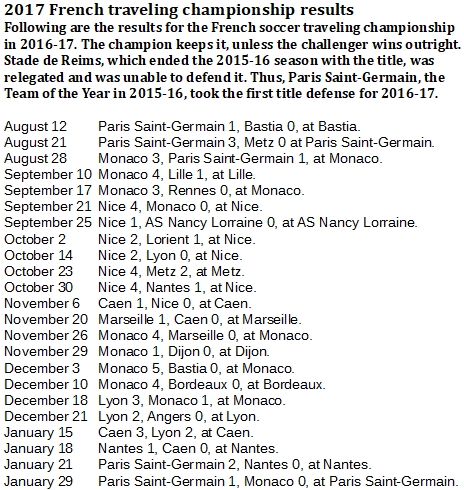