The Vancouver Whitecaps capitalized on winning their first four games to claim the North American First Division soccer championship for 2017. 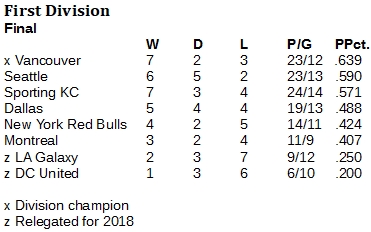 Vancouver won its first four games in the North American First Division and survived a rough road the rest of the way, capturing the championship for 2017.

Of their remaining nine games, the Whitecaps won only three. But they still captured 23 of a possible 36 standings points in their First Division games for a .639 points percentage. Seattle finished second at .590. The Sounders lost two of their first five games, then went unbeaten in their last eight, but it was not enough to catch Vancouver. 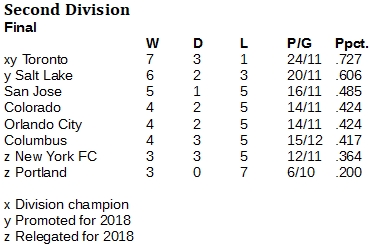 In addition to being the dominant team in the traveling championship in 2017, Toronto also had by far the best season within its ordinal division, with only one loss in 11 games and a .727 points percentage. Salt Lake produced an impressive campaign and will be promoted for the second straight time.

The two teams going down to the Third Division are New York FC and Portland.

Atlanta, the first-year team that won the MLS championship in 2017, also won the Third Division here to earn promotion in 2018. Joining Atlanta in the second tier for 2018 is the Chicago Fire.