The New York Red Bulls tore through the North American soccer First Division in 2018, outlasting a game effort by Real Salt Lake. But no team has ever had a year like Atlanta in the Second Division. 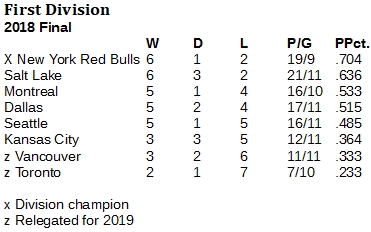 A torrid race in the First Division across North American pro soccer fizzled out in 2018 because one of the teams was just too hot.

Going to August, the Red Bulls were 5-0-1 and Real was 6-1-2. With one more of everything, Real was in a struggle even if the Red Bulls took a nick. And the Red Bulls actually took a couple,  coming to a draw in Vancouver and losing at Montreal by the end of Sept. 1.

But the Red Bulls really only needed one win by then, and they snagged it, 2-0, at home against Toronto on Sept. 22. With only two draws in its final two games, Real couldn't catch up.

The bottom of the division had a couple of surprising occupants, two teams that won divisions in 2017.

Vancouver, the First Division champion in 2017, fell all the way into the relegation zone with a .333 standings points percentage. Sporting Kansas City, at .364, was barely better, but was spared relegation. 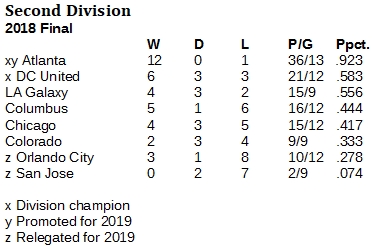 The Second Division in 2018 was a matter of extremes.

Atlanta won 12 of 13 games. The team didn't go undefeated, but its .923 standings points percentage is the best for any team in three years of this history. Atlanta will promoted to the First Division in 2019, along with DC United, which had just been dropped to the Second Division this season. 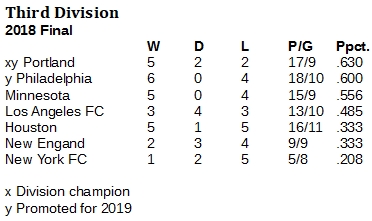 Portland's stay in the Third Division was short lived. Relegated to the lowest level for 2018, the Timbers responded by losing only two of their nine games to win that level. The other team being promoted for 2019 is Philadelphia, the last of the original Third Division teams from 2016 to be promoted.

In 2016, the Third Division included only four teams -- Colorado, Salt Lake, Chicago and Philadelphia. Salt Lake has risen to First Division contention in three years. Chicago and Colorado both were middling Second Division teams in 2018.

Big league soccer is growing quickly across North America. In 2019, Major League Soccer is adding its fourth franchise in three years with a new club in Cincinnati. The new franchise will begin life in the bottom division and work its way up.