Xavier had the best year of any team in the 2017-18 men's college basketball short traveling championship, ringing up 10 wins. But UCLA still has the most all-time with 17.

The shortened traveling championship in men's college basketball, which includes only the regular season, took its long run through the Big East in 2017-18.

Once there, the team that made most of it was Xavier with 10 wins, the most for any team with the championship during the year.

The prize did most of its kicking around in late November. UCLA began the season as champion and made three defenses before losing, 100-89, to Creighton in Kansas City on Nov. 20. The next night in Kansas City, Baylor took it away from Creighton with a 65-59 win in the same arena.

A week later, on Nov. 28, Baylor went to Xavier, where the challenging Musketeers produced a 76-63 victory. After Xavier's run, six other Big East teams won seven titles. The season ended with Marquette as the title holder after an 85-81 home win against Creighton on March 3. 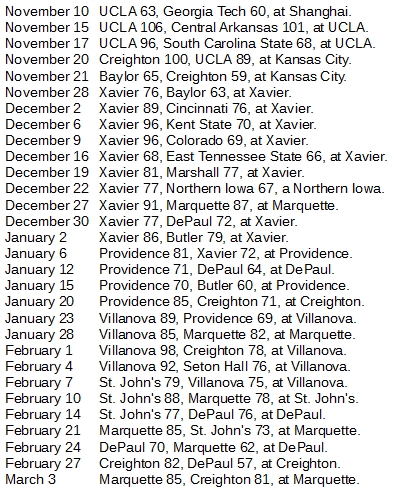