Manchester City romped through the English Big Six in the first year of the inner pyramid. Less fortunate were Premiership stalwarts Arsenal and Liverpool, which were demoted to the Middle Six for 2018-19. 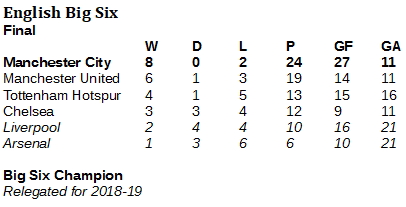 The standings in the pyramid within the pyramid that we're running in England tell you right away how tough that English Big Six is. Liverpool and Arsenal were relegated after the 2017-18 season.

We can expect, though, to see much of this as we run through these pyramids. The idea is to break the top league in the most competitive countries into three divisions, with six at the top, six in the middle and some number like six at the bottom. In an 18-team league, it is six. In a 20-team league like the Premiership, it's eight.

For this first run in 2017-18, the distribution of clubs is easy. We simply looked at the standings for 2016-17, put the top six clubs in the Big Six, the next six in the Middle Six, and the remaining eight in the Little Six(ish). 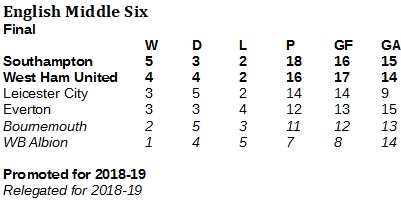 The Middle Six was a fairly even competition in which 12 of 30 games ended in draws. Only Southampton managed to win half of its games, which was good enough to finish on top of the group. Joining Southampton in promotion to the 2018-19 Big Six is West Ham United, but Leicester City finished less than one win behind. 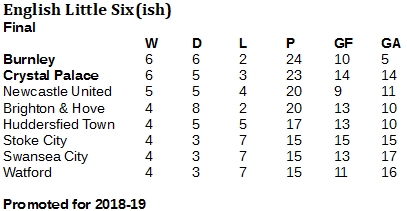 Bournemouth and West Bromwich Albion were to be demoted out of the Middle Six, to be replaced in 2018-19 by Burnley and Crystal Palace, the top two clubs in the Little Six(ish).