Paris Saint-Germain, the dominant French soccer club of recent years, lost only one of 10 games in the French Big Six race for an easy title in 2017-18. Nice and Bordeaux are tumbling to the French Middle Six in 2018-19.

The first run through the French inner-pyramid in 2017-18 revealed what the game of soccer has revealed frequently in recent seasons.

Paris Saint-Germain can and will thump any other club in the country. PSG crushed through the French Big Six, winning eight and taking a draw in 10 games to easily take the title. The Parisian side all but scored three goals per game, and allowed an average of less than one.

Nice and Bordeaux, which both lost six games in the Big Six, both are headed to the Middle Six in 2018-19. Being promoted in their place are Rennes and Saint Etienne. But Nantes and Guingamp both finished within a victory of taking the second promotion from the Middle Six. 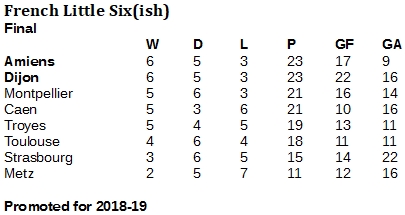 Lille and Anger both lost half of their games in the Middle Six. They will be demoted in 2018-19, to be replaced by Amiens and Dijon.