Jeonbuk Motors edged ahead of Incheon United and Suwon Bluewings to win the first Asian traveling soccer championship in 2017. In the end, Suwon beat Jeonbuk to carry the championship into 2018. 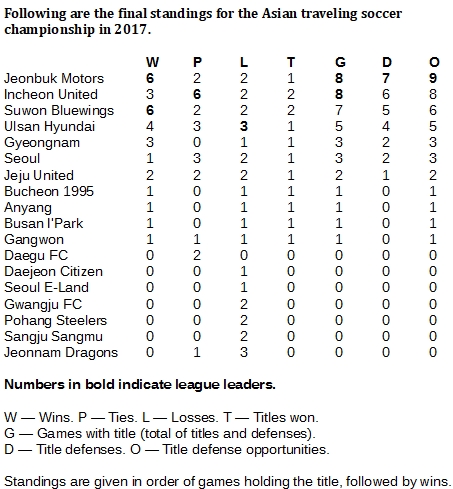 In its first season, the Asian Traveling Soccer Championship took a long route through just one country, South Korea, resulting in a tight, tense race down to the finish.

The winner for 2017 was Jeonbuk Motors, the caretaker to begin this competition after winning the Asian Champions League in 2016. Jeonbuk kicked it off with six defenses, then held on tight waiting for another opportunity while K League 1 rivals Ulsan Hyundai, Incheon United and Suwon Blue Wings produced credible threats.

The Blue Wings actually matched Jeonbuk at six wins before being derailed at home by Seoul in a 1-0 loss on Aug. 12. Seoul held on for two more games before dropping the title in a 1-0 loss at Incheon United on Sept. 17. Incheon, which already had four games with the title, tacked on three defenses – all draws – bringing itself up to the lead at eight games with the title before falling, 2-0, at Gangwon FC on Oct. 8.

Gangwon couldn't hold on in its only defense attempt against Jeju United, and Jeonbuk waited out the Jeju squad's next outing, an Oct. 22 fixture against Ulsan, which had five games of title. If Ulsan got it back with three games left, it could rally to Team of the Year. If Jeju could hold on, Jeonbuk had the next crack on Oct. 29.

Thus, Jeju's 1-0 squeaker past Ulsan only set it up for a 3-0 mauling from the Motors in Jeonbuk, who then defended the title against Hyundai in a Nov. 4 road outing before losing it to Suwon on the final day of the season.

When that smoke cleared, Jeonbuk and Incheon each claimed eight games of title, but Jeonbuk posted the better ledger with six wins compared with three. Suwon and Ulsan also could have won it in the end.

The title never was contested internationally, perhaps because Jeonbuk dropped it for the first time to Buncheon 1995 of K League 2 in the Korean FA Cup on April 18, initiating a six-game run in the lower division for this championship.

Ulsan brought it back to K1 with a 2-1 win against Gyeongnam in the FA Cup on May 17. In the month between, though, K1 clubs Ulsan, Suwon and Seoul lost Asian Champions League games to clubs from Japan and China, so the prize could have changed countries if it had been in the top Korean division during that stretch. 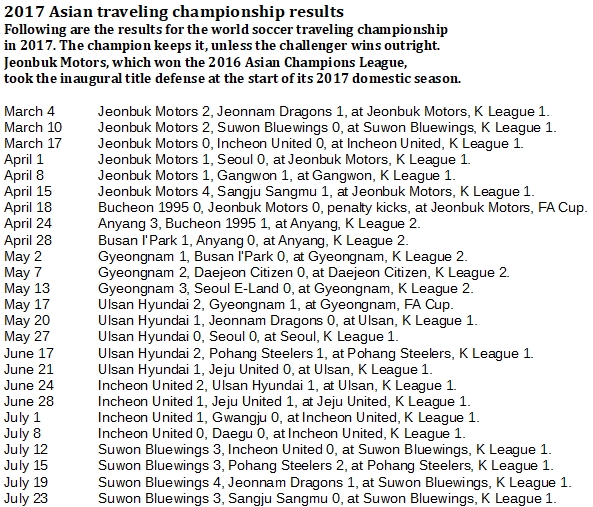