In very few quadrants across the four-by-four regions we've cooked up is there consistency at the top. Only the Washington Nationals have won or tied for their conference title in all three years we have run them. But it was the Atlanta Braves, and not the Nationals, who snagged the Elite Division berth for 2019. 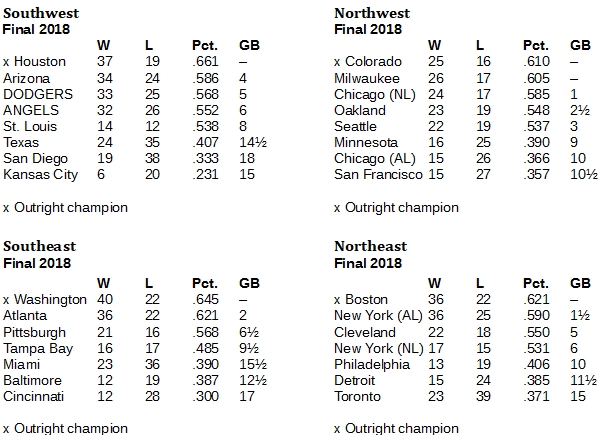 The four-by-four version of our regional leagues across big league baseball had an interesting new twist in 2018, but it wouldn't have been necessary. The old twists were quite enough.

As we look across the four quadrants, which we now are calling conferences, we see stability at the top of only one, the Southeast, where the Washington Nationals have won two of three outright titles through 2018 and split the other.

The only other club with a repeat performance of any kind across the top of its conference is the Houston Astros, who split the Southwest title with the St. Louis Cardinals in 2017 before winning it outright for the first time in 2018.

In the Northwest Conference, though, variety has spiced the top. The Chicago White Sox surprisingly won the first quadrant title in 2016, slipping to the bottom or near the bottom of this group in the last two years. In their place, the Seattle Mariners barely beat out the Colorado Rockies in 2017, then the Rockies barely beat out the Milwaukee Brewers in 2018.

The Northeast also has been up for grabs. The New York Yankees and Toronto Blue Jays split the championship in 2016. The Cleveland Indians won that title in 2017 and the Boston Red Sox won it in 2018.

In the West League, the Houston Astros have been a little more successful than they've been in the Southwest quadrant, winning the South Division outright the last two years. In 2018, the North Division winner was Milwaukee, following championships in that division for the Chicago Cubs in 2016 and the Minnesota Twins in 2017.

Unlike the previous two seasons, a champion could be declared for the East League in 2018. The Red Sox won five of their six meeting against the Braves during the regular season.

The establishment of the Elite Division for 2019 will have impacts on the four-by-four regions. Each quadrant will qualify one club that hasn't already qualified through the pyramid or the traveling championships, provided that club wins at least two championships of some kind in the four-by-four. For 2019, that means a club must win at least two of its three divisions. For the following year, new regional traveling championships will be added to the mix.

With the South League, we see how it works. Washington, as usual, won the Southeast Conference. But the Atlanta Braves won the East League's South Division. And, here in the South League East Division, the Braves nudge the Nationals by four percentage points. But it's enough for a second championship in this four-by-four for the Braves. Though the Braves came on strong in 2018, they finished fifth in the Fourth Division. But these two division titles in the four-by-four get them into the Elite Division.