Auckland City showed again, and in another way, how thoroughly it dominates club soccer in Oceana. The Navy Blues won the first year of the Oceana traveling championship in a landslide. 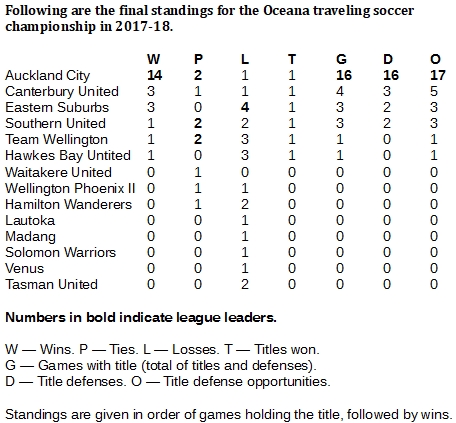 Auckland City had won the last seven renditions of the Oceana Champions League when we began following the traveling championship in Oceana with the 2017-18 season.

Auckland City is, far and away, the best club in this very small corner of the FIFA world. By FIFA geography, Australia is included in Asia, rather than Oceana, because the Aussies wanted a larger stage. It doesn't get much larger than Asia, and the Aussie representatives in those continental competitions aren't notably successful.

With Australia gone off to Asia, the kingpin country in Oceana becomes New Zealand. Technically, Tahiti and New Caledonia are France. In soccer reality, they aren't.

Of course, Auckland City promptly dropped the provisional traveling championship in the very first game of the domestic season to Team Wellington, which has been the most consistent and successful challenger of the last six years. Team Wellington has finished second in four of the last six years and appeared in five championship games, winning two. In four of those championship games, the opponent was Auckland City, and the results were split.

But, then, Team Wellington dropped the title right away to Eastern Suburbs, which play for the pride of Auckland City's eastern suburbs. Anyway, the championship went on a nice, little tour of New Zealand, changing hands five times in three months from the start of the season in the middle of October. In that period, every team in the league played for it and it was contested in every stadium in the league except for one -- Kiwitea Street, home of Auckland City FC.

Auckland City, indeed, held on for the remainder of the season, though the end wasn't glorious. It ended with a two-legged defense against Team Wellington in the Champions League. The first game, in Wellington, ended in a nil-nil draw. The rematch, in Auckland, ended in a 2-2 draw.

Obviously, the traveling title doesn't change hands in a draw, so Auckland remained the champ at the end with 16 title defenses. But Wellington actually won that round in the Champions League on away goals.

Wellington went on beat Lautoka, the top club in Fiji, in a lopsided final round of the Champions League. 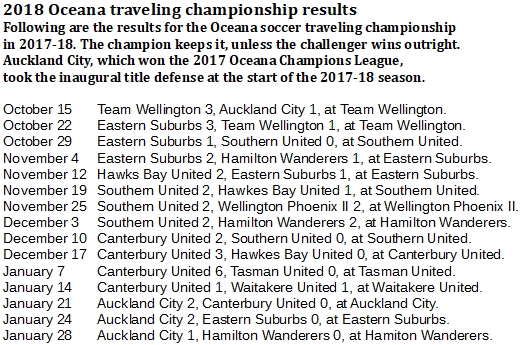 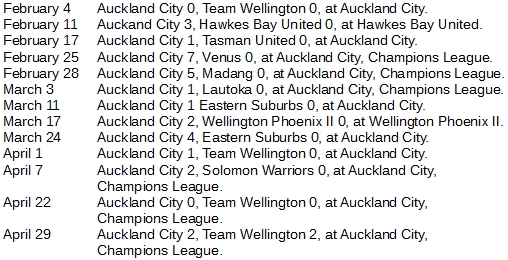