Barcelona only Spanish Big Six side to win half its games

Barcelona won seven of its 10 games in the Spanish Big Six for 2017-18. No one else, including Real Madrid, won more than three.

Barcelona cruised to the first Spanish Big Six title in 2017-18, perhaps because it was too difficult for any other club to win a game in this group.

Not even world-beating Real Madrid could win half of its games in the Big Six.

Barcelona won seven of its 10 games. Real Madrid and Atletico Madrid each won three. That's a tie for second place. But neither finished far from the relegation zone, which is occupied by Sevilla and Real Sociedad.

Valencia produced a dominating season in the Middle Six, earning top tier promotion along with second place Eibar. Dropping from the Middle Six to the bottom are Espanyol and Malaga. 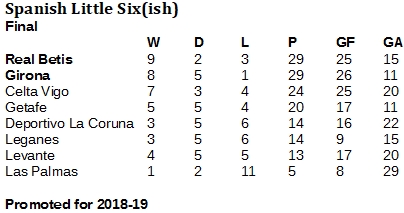 Real Betis and Gerona tied on top of the Little Six(ish) and are moving to the next division up in 2018-19.