Chape chews up a dozen games of Brazilian traveling title

The urban hotbeds of São Paulo and Rio de Janeiro have produced the most club history in Brazilian soccer, but the national traveling champion in 2017-18 was from Santa Catarina. 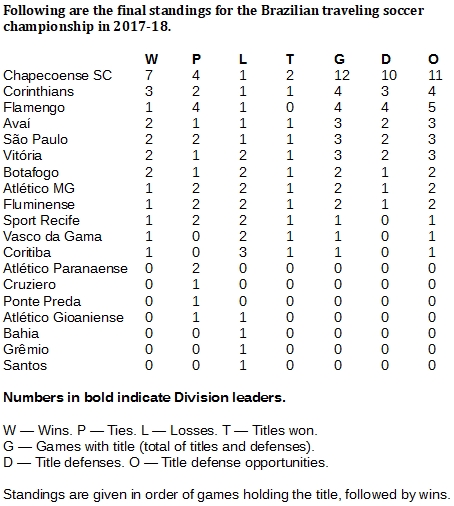 The roll of Brazilian club football champions has called the name of Chapecoense only once, and it happened the hard way.

In November 2016, as the squad was on its way to play the first leg of the Copa Sudamericana championship in Medillin, the pilot allegedly neglected a fuel stop and the plane landed abruptly without reaching its destination. The landing was not smooth. Of 77 people on the plane, only six survived. All but three Chapecoense players perished.

The waiting opponent, the Columbian side Atlético Nacional, was best known as the club Pablo Escobar made prosperous in the 1980s with Medellín Cartel money. On this occasion, Nacional conceded the cup to Chapecoense.

Other clubs across Brazil offered every kind of assistance. Some offered to loan players for free. The Brazilian FA was a little less empathetic. On its third consecutive president either under arrest or indictment for corruption charges in the United States, the FA requested that Chapecoense fill out its roster with kids and play its final Serie A game of the season. The opponent, Atlético Mineiro, responded with an announcement that it would not play the game.

Some of the top Brazilian clubs offered Chapecoense immunity from relegation for three years. Chapecoense officials refused the assistance.

So, this club's rise is remarkable. As of 2012, Chapecoense was Serie C, the third tier of Brazilian professional football. But it rose quickly to Serie A in 2014. In 2015, it reached the Copa Sudamericana quarterfinals. In 2016, it reached the Finals. Then, a plane crash.

End of story? No.

Chapecoense came right back to the Campeonato Catarinense over the first four months of 2017. That's the state league of Santa Catarina. Chapecoense won it. On, then, to the 2017 Serie A. And, here, Chapecoense even improved on its 2016 performance, rising from 11th in the table to eighth.

For our purposes here, Chapecoense registered even more victory. No team in Brazil carried the national traveling championship as much as Chapecoense. The Western Hurricane blew through the last two months of the Serie A season with the title, capping off the season with 10 defenses.

Chape won two titles during the season and had 12 games of title holding, easily outdistancing Corinthians from Sao Paulo and Flamengo from Rio de Janeiro, which each had four.

However, because no other team in the Campeonato Cararinense was ticked for Serie A in 2018, the traveling championship did not go through the state league at the end of this calendar. Avaí, the only other Santa Catarina club in Serie A for 2017, finished in the relegation zone. 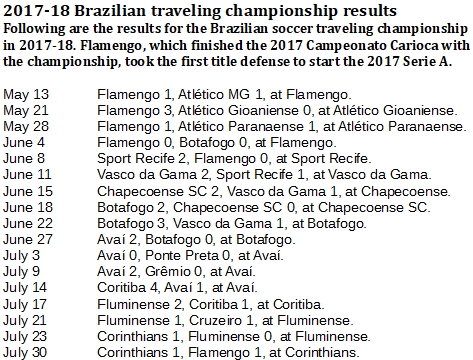 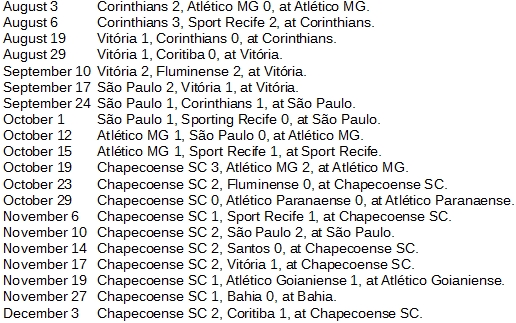