The Chargers led all pro football teams in 2018 with four wins in the universal pro football traveling championship. Of course, the New England Patriots managed to squeeze in a win. 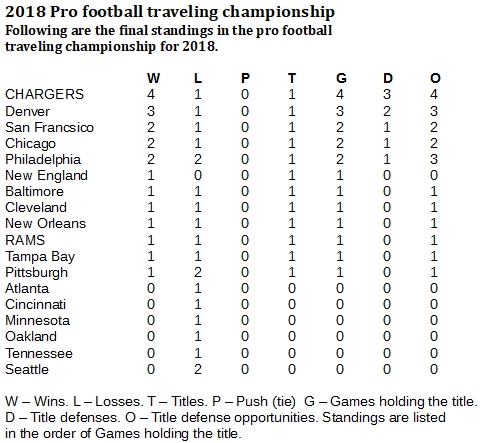 The Rams are the NFL team in Los Angeles that went to the Super Bowl for its efforts in 2018, but the Chargers were the LA team that won the pro football traveling championship for the year.

The Chargers won four games of championship, starting with a 38-14 win on the road against the Cleveland Browns on Oct. 14 and running through a 20-6 road win against the Oakland Raiders on Nov. 11. The Chargers finally lost the title in a heart-breaker, 23-22 at home to the Denver Broncos on Nov. 18.

But no other team in pro football won four games for the national traveling title. Denver put up two defenses after beating the Chargers, while the San Francisco 49ers and Chicago Bears held it for two games each.

The Rams also won a traveling championship, their second since returning to Los Angeles in 2016 and their seventh of all time. The Rams took the universal title from the New Orleans Saints with a 26-23 overtime win on the road, which unified it with the national division title the Rams took into the game. Not incidentally, the game also was for the NFC Championship and a Super Bowl Berth.

The Rams retired the national version at that point, but took the universal belt to The Big Game, and if you thought the New England Patriots were getting into this somewhere, here's where it happened. The Patriots notched a 13-3 win, which made them the first team to reach 10 universals since this began in 2000.

Historically, the Patriots are an astonishing 58-11 for the universal championship. The next best record belongs to the Pittsburgh Steelers, who reached their eighth title in 2018 and now are 33-14 overall. With their three wins in 2018, the Broncos improved to 23 all-time and moved up to third place. The Indianapolis Colts and Green Bay Packers round out the top five, each with 22.

But the Rams are knocking on the door now. Their performance in 2018 brought them up to 21-13 overall. And the Chargers improved to 17-14 all-time. 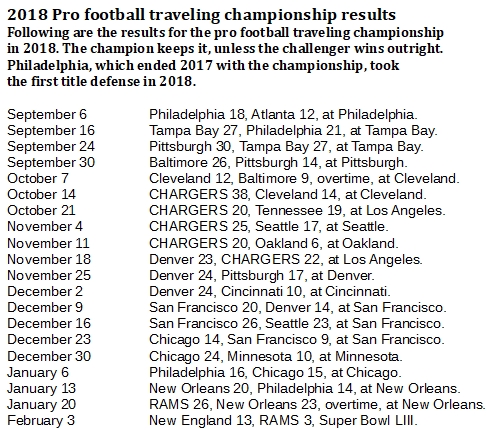