Because a new league is being introduced, new criteria are needed to make firmer decisions about who actually is the Team of the Year in these baseball traveling championships. The criteria worked out badly in 2018 for the Dodgers. 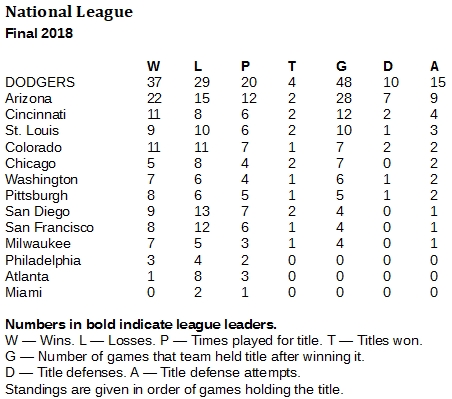 The traveling titles shall continue to function as always, but the process of deciding which team is the best traveling championship team of the season has long been in need of refinement. Until now, the need has never been pressing and the decision has been more amusing than not. The process wasn't designed altogether for justice or accountability. After all, absolutely nothing was riding on being named Team of the Year.

The brand new elite division changes that, holding open a championship berth for each of the several traveling champions -- those tracking the two major leagues and the one across the major leagues, all of which will enter their ninth year in 2019, and the new titles going through our mythical West, East, North and South Leagues. The new leagues are running traveling championships for the first time in 2019, so their winners will be in the mix for the 2020 Elite Division.

When we say each of these traveling competitions receives a "championship berth," we mean that the champion is guaranteed entry into the Elite Division, not that the traveling competition gets a berth. That is, if the season's traveling champ in some league has qualified by some other means, the next team down doesn't receive an invitation.

Needing some kind of objective, measurable criteria by which to determine a champion, it turns out we have plenty to take from the information published here. Thus, the following seven criteria are set out for determining the championship. Whatever team comes out on top in the most criteria is the champion.

First, of course, it's necessary to winnow down our participants to the few contenders who meet some minimum standard. To be eligible for the "stat-off," a team must have won at least two championships and posted at least three defenses, or one championship with at least six defenses. That will lop off 80 percent of the teams and still include everyone who could plausibly claim to be the best.

In the event that no winner is decided through this process, the trump criterion shall be head-to-head record. If there is no head-to-head, then we shall revert to total championships plus successful defenses, then total games of championship.

It makes a difference, which comes through when we look at the traveling title among National League clubs in 2018. Any other year, we would look at these standings and the Dodgers stand out as, obviously, the Team of the Year. How often do we see 48 games in a baseball season with a traveling championship? Four titles in one year?

So, we apply the criteria and, you know, the criteria generate an evidence base amounting to an argument for the team they select, and they give due credit to the Dodgers for four titles and 48 games with the title -- and, yet, it's not the Dodgers. It's the Arizona Diamondbacks.

So, just as in the First Division, the Dodgers are denied entry to the Elite Division for their inability to handle the Arizona squad. It came down to head-to-head. By the criteria, the Diamondbacks and Dodgers came up even, each winning three. But one of the categories belonging to the Diamondbacks trumps the rest.

In addition to importing the title from 2017, the Dodgers won four more and held the title at some point in every month of the season except August. With 48 games of title defense, the Dodgers far outpaced the second-best team, the Arizona Diamondbacks, who had 28.

Two of those Arizona victories ended Dodger championships. The first of those was a three-game sweep in Arizona April 2-4 to take the title to the desert for a 25-game defense that included turning back a challenge from the Dodgers April 13-15 at Dodger Stadium. Another Diamondbacks victory ended a 13-game Dodger title run in September.

The one time the Diamondbacks didn't win, it was just barely. A four-game series in Arizona had to go into tiebreakers. The first, total runs, was tied, 15-15. The second is total strikeouts, which went 35-32 for the Dodgers. 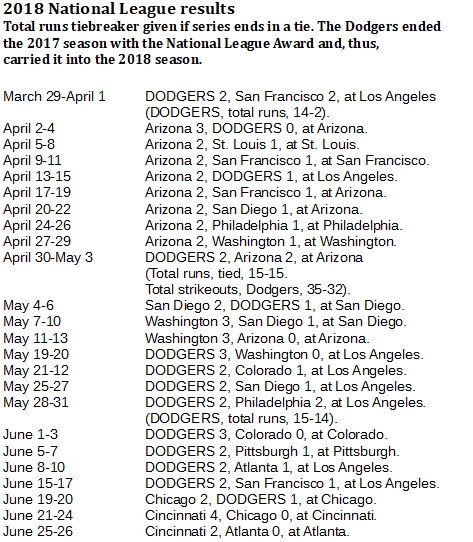