The establishment of an Elite Division for 2019 made the 2018 baseball pyramid chase all the more interesting. Somehow, though, the Dodgers are left out of the party. 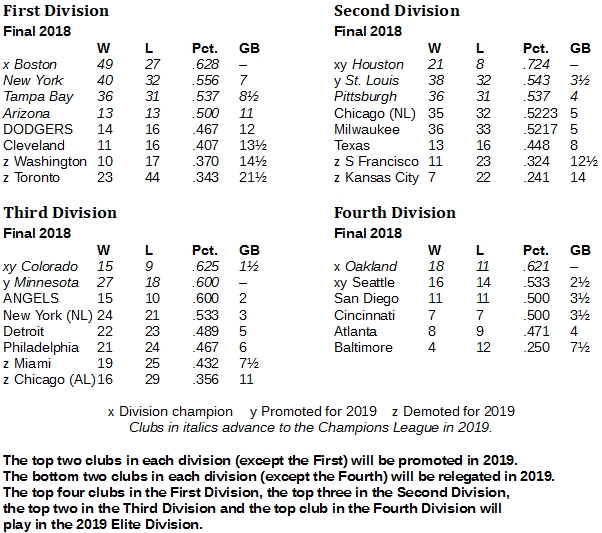 The 2018 baseball season began with a decree that a new competition would be established for 2019, a champions league that would include the top finishers at every level of the promotion/relegation pyramid from the previous season. It shall be called the Elite Division.

In this baseball arrangement, of course, we're just looking at the big league clubs across North America, but we do have them in four divisions. And it does seem, without putting pencil and paper to it, that the leading clubs from the lower divisions wind up being competitive year by year. So, we'll find out, sort of.

Here's the scheme, which will run across every promotion/relegation pyramid in these pages. In sports with four levels to the pyramid, the next year's champions league will include the top half of the first division (four teams), the top three in the second division, the top two in the third division and the top team from the fourth division.

The effect, one supposes, would be to add a bit of juice to the middle of the top divisions and create a little more value for winning the bottom rung. The top two clubs from every division except the first always have been promoted. But there has been nothing in it for the second-place team in the top division. Now, there is a prize for finishing in the top half of the top tier, and also for the third-place team in the second division.

The new league will embrace all of the pyramid champions from the previous season, along with a few others with demonstrated competence. Not only will the new league juice the pyramid, but it shall stand at the top of the pyramid system as a fascinating competition in its own right. That is the dream.

The additional competition succeeded in making the baseball pyramid in 2018 even more interesting than usual. And more heartbreaking. Yes, the dream already is coming true.

Take, for example, the First Division. As the regular season ended, the Dodgers were in fourth place at 13-12, followed by the 13-13 Arizona Diamondbacks. Neither club was eligible for promotion or relegation at that point, because each had only two opponents from the First Division (three is the minimum). However, that stipulation will not apply to eligibility for the champions league. If the season had ended then, the Dodgers would be in the 2019 champions league.

However, because of the imbalance in baseball schedules, it is the one sport with a pyramid in which the postseason is included. And it happens that the Dodgers lasted to the World Series, where they met the Boston Red Sox of the First Division.

We all know, of course, that the World Series went badly for the Dodgers. The Red Sox beat them in five games. The Dodgers finished 14-16 in the First Division, fifth place. The Diamondbacks are going to the champions league. The Dodgers were the best club across the National League for two years running, but in these tests weighted to the top teams in the game, their failures against the Diamondbacks and Red Sox cost them dearly.

The Dodgers, however, never had to fear relegation, a fate that the Cleveland Indians escaped, but the Washington Nationals and Toronto Blue Jays did not.

In the Second Division, the added arrangement produced a new prize, for while first and second places always have earned promotion, third place now has the champions league sweetener. And that still wasn't enough to account for the strong group of clubs that bunched in the middle of that second tier, all from the National League Central Division.

None of them could match the Houston Astros, who now have climbed the ladder in the three-year minimum after spending 2011 through 2016 in the Fourth Division. The Astros will be in the First Division in 2019 after a 21-8 showing to top the 2018 Second Division.

The race for the other promotion was much more thick, made juicier by the addition of a champion's league berth for the third-place club. Four teams were in this thick, and they know each other well.

Not necessarily for nothing, we note that this result is almost precisely opposed to how it actually went down in the NL Central race. In that form, the Brewers nosed out the Cubs by a game, with the Cardinals finishing well down and the Pirates even further back.

The Brewers were 27-31 in their games against the Cubs, Cards and Pirates. They won their big league division over those teams without beating those teams. They were 69-36 against everyone else. Head-to-head among the four clubs, the Cubs were 30-28, while the Cardinals and Pirates each were 29-28. The Brewers won the NL Central. In the Second Division, they're out of the money.

The Cardinals actually made the race for second place more interesting than necessary, dropping five of six to the Brewers and Cubs during the final week of September. Third place actually came down to the one-game playoff for the NL Central title between the Cubs and Brewers on Oct. 1. The Brewers won it, 3-1. The Brewers were out of contention by then, but a win for the Cubs would have put them in a flat-footed tie with the Pirates. The Cubs held a 10-9 tiebreaker, but they also might have faced the Brewers and Astros later in the playoffs.

More heartbeak in the Third Division, where the Angels, Colorado Rockies and Minnesota Twins tightly bunched at the top. Percentage rules here, so the Rockies took it at 15-9, .625.

The Twins (27-18, .600), and Angels (15-10, .600), were right there. But the Twins took the second promotion for their lead over the rest in the games column. When the championship  is split like this between the categories, the percentage leader is declared champion, but the games leader also will be promoted. In principle, a team playing to some high percentage in more games is more accomplished than another team reaching that same percentage in fewer games.

There was much less controversy at the bottom of the Third Division, with the Miami Marlins and Chicago White Sox ticketed downward. Two American League West clubs, the Oakland Athletics and Seattle Mariners, were clearly the best two clubs in the Fourth Division. Between them, the A's were better. Both are going up to the Third Division, but the A's are going to the champion's league.