It was another year of interesting races in 2017, our second season of running the regional baseball leagues based on quadrants that actually function as three discrete divisions. But only the Cleveland Indians and Washington Nationals repeated 2016 championships. 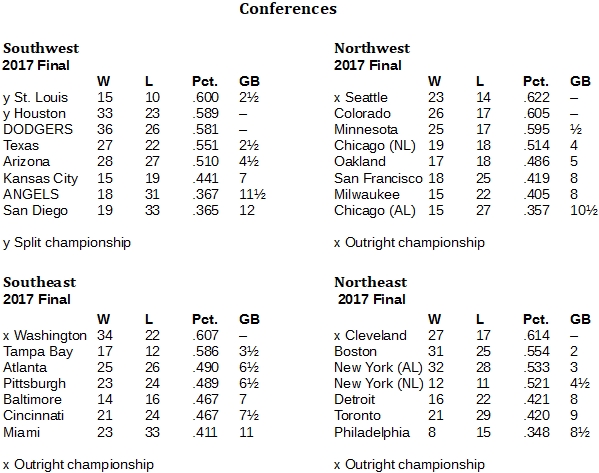 The second season of our four-by-four alignment in baseball produced remarkably few repeat champions across the fake news ether in 2017. But it did produce a lot of interesting results.

Take, for example, the Southwest Conference, easily the domain of the Texas Rangers in 2016. The Rangers fell back in 2017, while the Dodgers and Houston Astros came on so strong that they both appeared in the World Series.

So, it only took two seasons of this to get two clubs from the same quadrant into the World Series. Either could have won the Southwest outright by taking the Series in six games or fewer, and either would claim at least half of the title by winning it at all. Of course, Houston won Game 7, which was just enough to tie the Dodgers in the games back column.

However, the fact that the Series even went to Game 7 ensured that half of the title would go to the St. Louis Cardinals, who finished with a .600 winning percentage to top both October contestants. The Cardinals played many fewer games than the Dodgers or Astros, who both finished a cushy 2½ games ahead of the Cards despite playing to lower winning percentages.

By the guiding laws of this universe, we split the championship in cases like this, meaning the Cards get a share for winning the percentage side, while the Astros get the share from the game side because they outpointed the Dodgers in percentage. Though the Dodgers and Rangers finished in different sorts of ties with the Cardinals and Astros, the latter two teams get the title.

Another great race kicked up in the Northwest between the Seattle Mariners, Colorado Rockies and Minnesota Twins. The Mariners and Rockies finished tied in the games column, but the Mariners nudged past on percentage points. We have to split the championship. The Twins were right there, though, ending ½ game back.

The Washington Nationals went unchallenged in the Southeast, while the Cleveland Indians prevailed in the Northeast scrum among the big league markets of the eastern seaboard and the Great Lakes. The Indians finished two games ahead of the Boston Red Sox and three up on the New York Yankees.

In the Southwest's guise as the South Division of the West League, the Cardinals plummeted from a share of the championship to sixth place in this eight-team rack. The Astros barely prevailed over the Dodgers at the top.

A similar decline occurred in the Northwest in its guise as the North Division of the West League. The Mariners tumbled to nine games off the top, which was settled by the Twins.

As for the league championship, the Astros won five of their six meetings for the Twins, easily earning the crown.

Moving on to the East League, we can see that the Yankees and Red Sox both closed the gap on the Indians in the North Division. But no one in the South Division was closing in on the Nationals, who won it by 10 1/2 games over the Pittsburgh Pirates.

The Nationals and Indians both went to the postseason, but neither came close to making it to the World Series. Nor did they meet during the regular season. The same scenario occurred last season, when the Nats and Indians also were the division winners. Because the clubs never met, no league champion can be declared.

In the South League, the Dodgers finally took a bite, a big one, winning this group by four games more than Houston. The Nationals, again, won their side, this time by five games on the Tampa Bay Rays.

The Dodgers and Nationals had to be declared co-champions across the league. Not only did they split their six meetings during the season, but they also each scored 16 runs in those games. No reason to parse it further than that.

In the North League, the Indians joined the Nationals as the only clubs to win all three of their divisions here. Cleveland finished the East Division with a .598 winning percentage, which actually was the worst of its three efforts.