Sometimes a team crashes so quickly that it occasions a new rule. That's Köln. Then, sometimes, you have a great race at the top. That was Bayern Munich and 1899 Hoffenheim in the 2017-18 German Big Six. 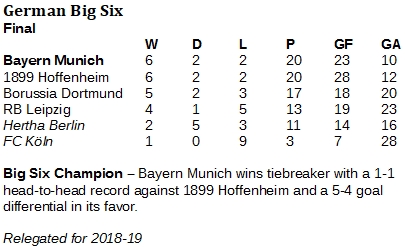 The inner pyramid among Bundesliga teams in 2017-18 produced a great race and an interesting problem.

The Big Six race ended in a dead heat between Bayern Munich and 1899 Hoffenheim, each with six wins and two draws in 10 games. The decision went to Bayern in a tiebreaker, a 5-4 goal differential in the two games that they split.

The problem lies at the bottom of the standings with FC Köln. The German Big Six for this first run was picked right out of the 2016-17 Bundesliga standings. FC Köln finished fifth in those standings and only lost nine games.

But 2017-18 was a different story for Köln, which fell all the way to the bottom of the Bundesliga with only five wins. Normally, a club being relegated out of the top division of the inner pyramid won't decline so poorly that it gets kicked out of the league entirely. It would simply drop to the second division. Obviously, though, Köln can't go to the second division, or even the third. So, an adjustment is necessary, but not difficult.

Oh, hell, let's make it difficult. But without going through the painful arguments and details, we'll just stipulate that when a Big Six club is relegated from its league entirely, the decision about whether to demote one Middle Six club or promote three from the Little Six will be made on head-to-head results.

In practice, it goes like this. We look at the bottom of the Middle Six and we see two clubs, Werder Bremen and Borussia Mönchengladbach, each with identical records. Normally, they're both being relegated and we wouldn't bother with breaking the tie, but we have the Köln problem here. Turns out that the Prussians won, 2-0, at Bremen and the two clubs hit a 2-2 draw at Mönchengladbach. Thus, Bremen is demoted and Mönchengladbach still has a chance.

Thus, Köln's rapid decline was a gift to Mönchengladbach, which was spared relegation. FC Augsburg and Hannover 96 are going up to the Middle Six.

An even more interesting story of relegation besides even Köln is the tale of Hamburger SV, which had been the only German club continuously playing in the top flight of the national system since the end of World War I. The club has roots going back to 1887, but was formed as Hamburger SV on June 2, 1919. With one more win in the 2017-18 Bundesliga, the Hamburg club would have made it 100 years. So close, and yet, so far, as we love to say.