The college football traveling championship returned to the Big Ten for the first time in 12 years in 2018, and it stayed there through the end due to a strong finish by Ohio State. 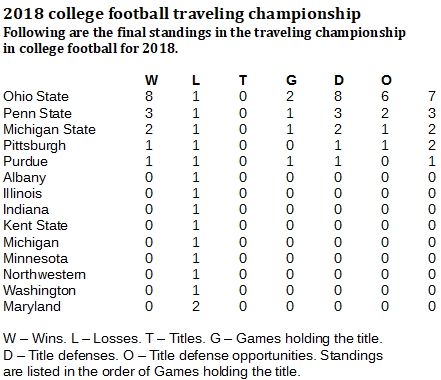 In 40 years of the college football national traveling championship, it has spent very little time in the Big Ten. A grand total of 41 games.

And in no season has the title spent more time in the oldest conference than 2018, when the title stayed in the league for 14 games and still lived there in the end, after Ohio State beat Washington, 28-23, in the Rose Bowl on Jan. 1, 2019.

The die probably was cast for the Big Ten to capture the title on Nov. 24, 2017, when Pittsburgh upset defending champion Miami, 24-14, on the final day of the season. Because Pitt didn't draw a bowl assignment, it held the championship to the beginning of 2018, which it marked with a 33-7 win against Albany.

One kind of knew all along that once Pitt got the title, Penn State would get a clear shot at it during the second week of the 2018 season, and Penn State didn't miss that shot. Playing in Pittsburgh, the Nittany Lions posted a 51-6 win, their first win for the traveling championship since they joined the Big Ten in 1993.

Playing as an eastern independent, Penn State won the traveling championship for the first time with a 23-3 win against Alabama in Tuscaloosa on Oct. 25, 1986, then held on for six title defenses before losing it back to Alabama in State College by a 24-13 count on Sept. 12, 1987. The Lions later that year regained the championship with a 21-20 win at home against Notre Dame, but lost their next game, 35-10, to Clemson in the Florida Citrus Bowl on Jan. 1, 1988. Penn State hadn't held the title since.

Following its win against Pitt to take the title early in 2018, Penn State posted two walloping defenses against Kent State and Illinois before facing Ohio State, which is easily the best Big Ten team in the history of the championship. The Buckeyes notched a 27-26 win at Penn State to take the title for the first time since 2006. Ohio State won it that year with a 24-7 win at Texas on Sept. 9 and defended it 10 times before losing to Florida, 41-14, in the BCS Championship game the following Jan. 8. That had been the last time a Big Ten team held the championship.

Ohio State did not defend the title won from Penn State with great distinction, notching two weak defenses before losing 49-20, at Purdue on Oct. 20. But the Buckeyes somehow got it back with a 26-6 win at home against Michigan State. From that point, the Buckeyes won out and now will take the title to the start of the 2019 season.

With eight wins for the traveling championship in 2018, Ohio State moved up to 25 all-time, most of any Big Ten team. Penn State has 11, but only three as a Big Ten team. 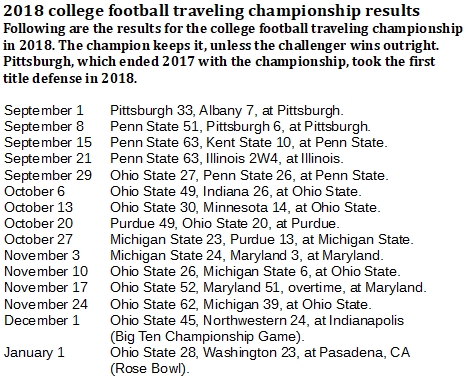