The Rams won six games across pro football's large market traveling championship in 2018 and still held it at the end of the season. 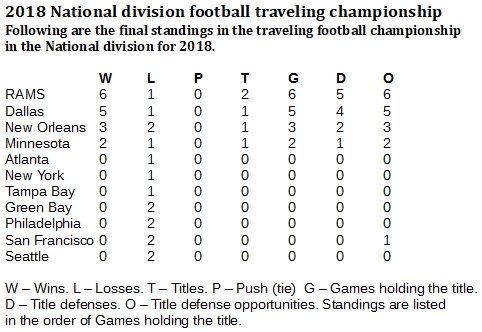 The Rams took a huge step forward in the National division of the pro football traveling championship, winning two championships and six games to climb near the top of the all-time standings.

After taking the championship from the Minnesota Vikings, 38-31, at the Coliseum on Sept. 27, the Rams produced three defenses, including key victories against the Seattle Seahawks and Green Bay Packers, before losing on the road, 45-35, to the New Orleans Saints on Nov. 4.

Buf the Rams came with another key victory on the road against the Dallas Cowboys in the NFC playoffs, a 30-22 win that they followed with a 26-23 overtime win at New Orleans for the NFC Championship.

The Rams now hold the big-market traveling title going to 2019, and their position is much better than a year ago in the all-time standings.

The Philadelphia Eagles still lead this group with 29 wins, followed by 26 for the Packers. But the Rams moved up to a third-place tie with Seattle at 23 wins. It's worth noting that the Eagles, Packers and Seahawks all were 0-2 for this championship in 2019. The Rams playoff win against Dallas also enabled them to push ahead of the Cowboys, who now have 22 wins all-time.

The New York Giants still have the most traveling championships all-time on the national side with 11, followed by the Eagles with 10. But the Cowboys, with their championship, moved into a third-place tie with the San Francisco 49ers at nine. The Rams now have eight of these titles, tied for fourth in the national conference with Seattle and Green Bay. 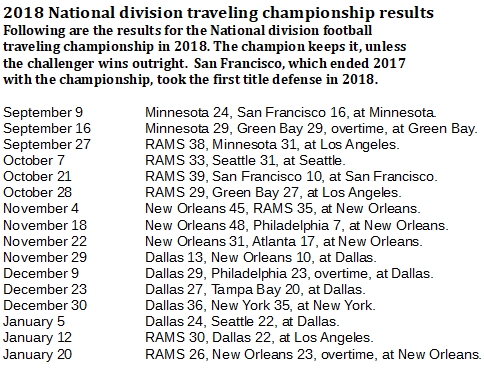