Despite being unable to wrestle for world traveling soccer title from Real Madrid to begin 2017-18, Barcelona won it back later in the year and increased its all-time lead in the competition. 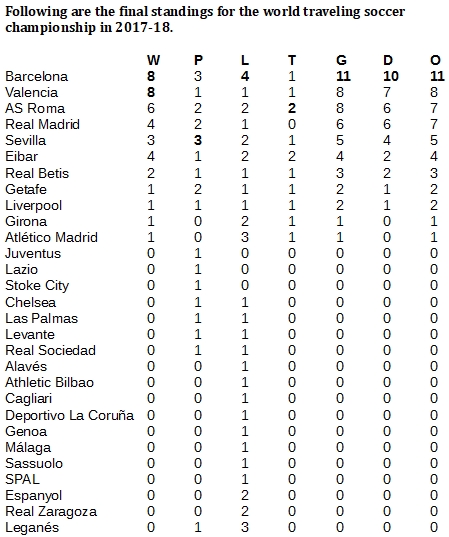 During the first year of traveling soccer championships across Europe and the world, each prize took a completely different route to the same destination. That destination was the opening game of the 2017-18 season for the holders of those championships, Barcelona and Real Madrid.

And then the two met to begin the 2017-18 season for the Supercopa de España, which pits the previous season's top tier domestic champion against the winner of the previous season's national cup competition. That would be Real Madrid, as defending La Liga champs, against Barcelona, which won the Copa del Rey.

Real Madrid won both legs, convincingly, and thus added the European title to the world title it already held. Unfortunately, the paths for the two championships never diverged. Real Madrid was, indeed, headed for the Club World Cup in December and would have at least put up the world title against a club from the United Arab Emirates (Al-Jazira) and a club from Brazil (Grêmio).

But Los Blancos fell to Real Betis in La Liga on Oct. 20 and the titles passed eight times through seven Spanish clubs before Barcelona took them from Eibar on Feb. 17. Then, Barcelona went on the best tour of the season, ten title defenses, ending the season with the best showing in Europe and the world.

Barcelona's first defense was a 1-1 draw at Chelsea in the Champions League. European wins against Chelsea and AS Roma followed. But the Roman club won the Champion's League rematch in Italy and both champions moved to Serie A for a moment.

But AS Roma had to tangle with Liverpool in the Champions League. The Reds won their opener, 5-2, at home and defended it once in the Premiership before the return match in Rome, won by the Italian side. AS Roma finished out the season with three title defenses in Serie A.

Italy and England became the third and fourth countries to hold the world championship, after Spain and France both had it in 2016-17. 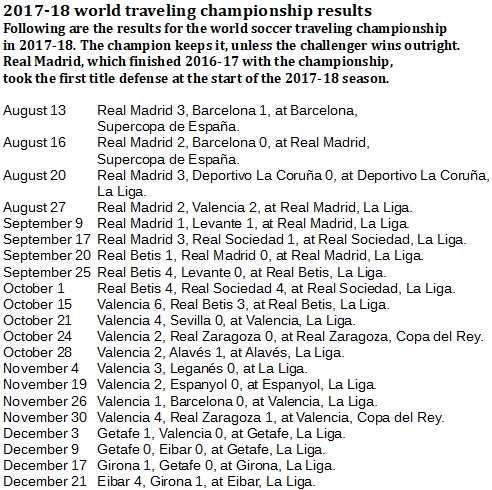 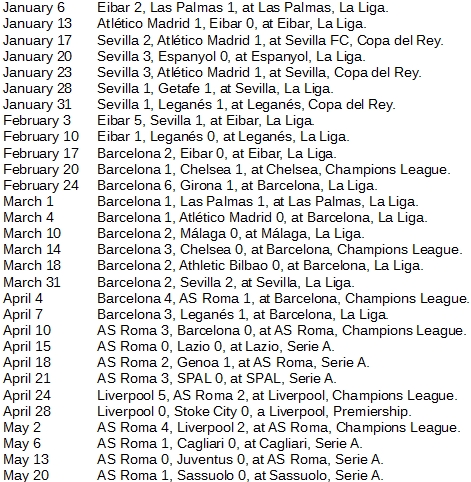