The Saskatchewan Roughriders turned in their second strong season in the two years of the Canadian football traveling championship, coming through 2018 with the all-time lead in wins. 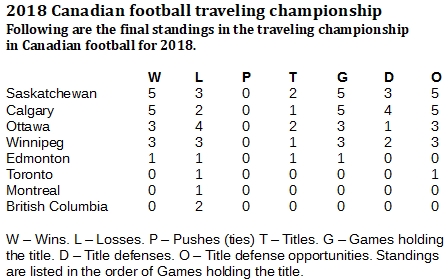 The traveling championship in Canadian football is at home on the western side of the country through the first two years of the competition.

No surprise there. The western teams have dominated Canadian football for six or seven years.

Specifically, the king of this hill through two years is the Saskatchewan Roughriders, who lead the nation with 11 traveling title wins after a five-win campaign in 2018.

The Roughriders nabbed the championship from the Toronto Argonauts with a 27-19 win at home in the first game of the season, though they just as quickly dropped the prize a week later in a 40-17 road loss to the Ottawa RedBlacks.

The Calgary Stampeders, the early challenger for traveling supremacy, took the championship with a 27-3 win a week later in Ottawa and held on for four defenses, including a 34-22 win at Saskatchewan on July 28. But the Roughriders took the title from Calgary on Aug. 19 with a 40-27 win in Regina.

Then the Riders rolled out three title defenses before falling, at home, against Ottawa.

All-time, Saskatchewan has 11 wins, followed by nine for Calgary. Winnipeg is in third place with six wins. 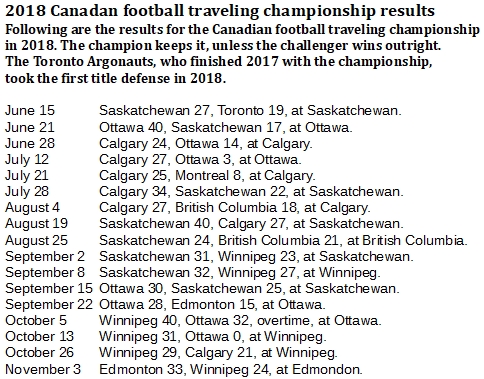