Texans have best year ever in American pro football traveler

The Houston Texans rolled up six wins in the pro football traveling championship on the NFL's smaller market side. Of course, the New England Patriots popped up with another championship, too. 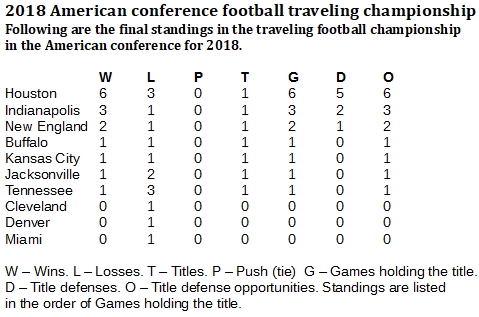 The Houston Texans accomplished almost as much with the American division pro football traveling championship in 2018 as they had in the whole history of the title before then.

The Texans were 7-12 historically for this championship when they played at home against the title-holding Buffalo Bills on Oct. 14. The Texans prevailed, 20-13, then defended the championship with five straight victories.

They finally fell to the Indianapolis Colts, 24-21, at home on Dec. 9. But they already had accomplished enough to top the American division standings for the year.

It would figure, though, that New England factored in this race, as well. The Patriots defended the title on the first day of the season, beating Houston, 27-20, at home. The Patriots fell on the road against the Jacksonville Jaguars the following week, but they are the Patriots, which means they went to the playoffs. There, they defeated the Kansas City Chiefs, 37-31, in overtime for the AFC Championship.

Thus, the Patriots claimed their 12th traveling title on the American side since it began in 2000. The Patriots are 55-15 historically for the American championship. And they take it to the 2019 season. 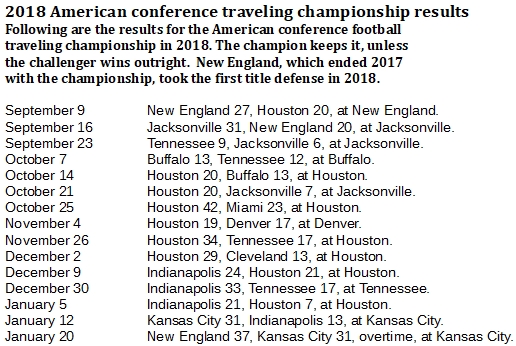