Three years in baseball is long enough for clubs to go from way up to way down. The results from the 2018 tri-annual regional leagues show some of the difference three years can make.

Every three years, the major league baseball schedule gives us a chance to work out a favorite toy, an overlay of three regional leagues over the two existing big leagues. It works during those years when the interleague schedule pits the divisions east vs. east, central vs. central and west vs. west.

During those years, we can just follow the schedule to an East League, a Center League and a West League, dividing each of them into north and south divisions. So far, those years have been 2015 and, now, 2018. 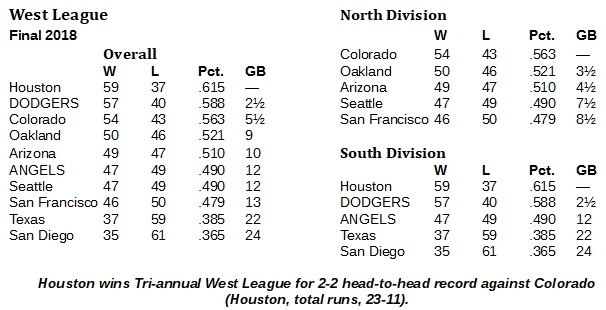 In 2015, the Dodgers overtook the Houston Astros during the second half of the season and claimed this tri-annual West League championship. In 2018, the Astros were strong all the way to the end and finished 2½ games ahead of the Dodgers both across the league and in the South Division.

The North Division witnessed a reversal. The San Francisco Giants, who won the division when it was last played in 2015, finished in the 2018 cellar. The Colorado Rockies, who occupied the division basement in 2015, came back and won it in 2018.

The Rockies hung tough in their interleague "rivalry" games with the Astros, splitting the four games. But the Astros outscored the Rox, 23-11, to claim the league championship.

In 2015, the Chicago Cubs were up-and-coming, and they rose to the Center League championship with a strong playoff run. For 2018, we decided to leave playoffs out of the regional baseball leagues, just to see how it looks. But it wouldn't have helped the Cubs, who still finished 7½ games behind the Cleveland Indians in the Center League.

The Cubs could still have won the league championship after capturing the North Division, but they lost three of four during the year to the Indians. Thus, the Indians were named the 2018 Center League champions after holding off the pesky Pittsburgh Pirates during the regular season.