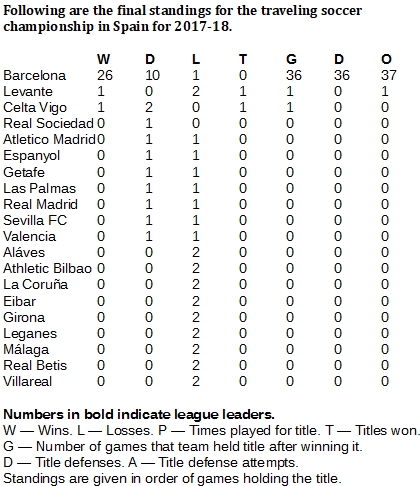 Barcelona began the 2017-18 soccer season with a chance to make history as the first club to simultaneously hold the world, European and Spanish traveling championships. That didn't happen, but Barcelona still ended the season historically.

Ending 2016-17, Barcelona had been the Spanish and European champ for six games after a 3-2 win at Real Madrid on April 15. But the world championship took a much different path through that inaugural season of 2016-17, so Real Madrid held that title when it ended.

Which only meant that the world and European championships were somehow going to be unified in the Supercopa de España between those clubs to start 2017-18. However, only Barcelona could have unified those two titles with the Spanish title, because the national titles are contested only in the top domestic leagues. Thus, the Spanish title was not on the line.

Anyway, Real Madrid won both legs to start the season and marched off with the world and European championships. Holding only the Spanish title, Barcelona made history with it. Barça added 36 title defenses to the six games of title it brought into the season, adding up to a 42-game title streak that stands as the world traveling championship record in any soccer competition.

Barcelona finally lost the domestic traveler in one of the most stunning upsets of the season, a 5-4 loss at tiny Levante on May 13.

Thus, Barcelona stormed to a huge lead in the all-time traveling championship three years into the competition. The Catalans now have 64 games of championship all-time, with Real Madrid well behind at 34.

Not for nothing, Barcelona also improved its all-time positions in the world and European championships, despite the two losses against Real Madrid that began the season. 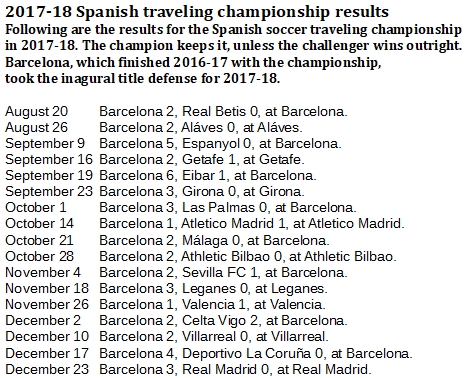 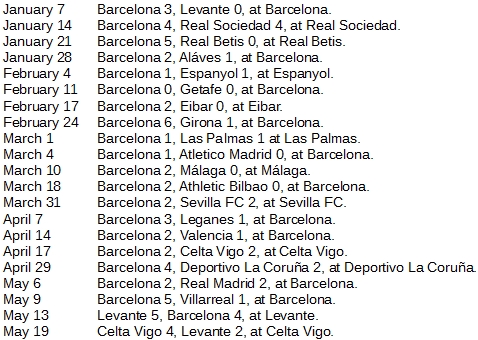