As usual, Bayern Munich showed itself the best German club in a competition, though the Bavarians barely finished ahead of Borussia Dortmund for the country's traveling soccer championship in 2017-18. 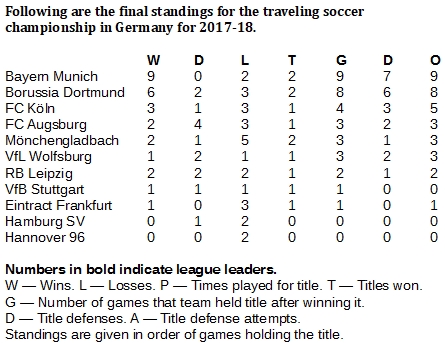 Through 2017-18, Bayern Munich won six consecutive domestic championships in Germany. The Bavarians are legendary, one of the most successful teams on the international stage, in Europe and beyond.

And once we began running a traveling championship across Germany, this club has been all but the rest of the Bundesliga put together.

Three years into this, Bayern has 34 games with the championship, an entire season's worth, already. Die Roten deservedly was given the title to caretake at the start, responding with 15 defenses. Bayern since has won three championships outright.

The all-time second-place team, Borussia Dortmund, has 19 games with the title. The Dortmund squad has earned four titles, one more than Bayern Munich. Werder Bremen is third all-time with 12 games of title.

The 2017-18 season shaped up as a tug-of-war between Bayern and Dortmund. The Prussians won an early championship, but lost it to RB Leipzig, which lost it two games later to Bayern. The Munich squad held it for two defenses before falling, 2-1, at Borussia Mönchengladbach, on Nov. 25.

Borussia Dortmund regained the title on Feb. 2 with a 3-2 win at FC Köln, then produced six defenses, bringing itself up to eight for the year. But when the Dortmund squad took that streak on the road against Bayern Munich on March 31, the result was a 6-0 drubbing in favor of the home squad.

At that point, Bayern Munich needed five defenses to pass Dortmund in the season standings, and it produced just that many before losing, at home, to VfB Stuttgart on the final day of the season. 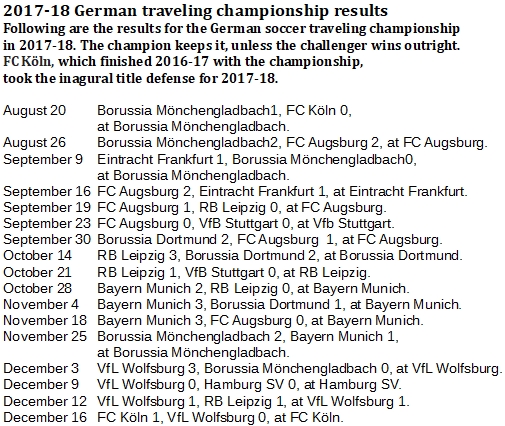 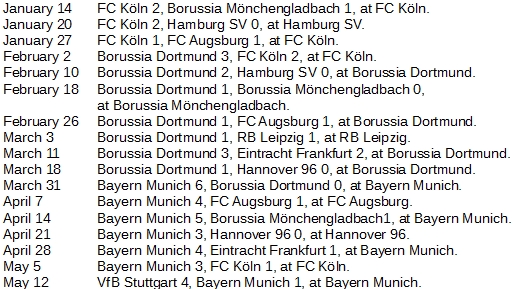