The Baylor women's basketball team finished the 2018-19 season with 28 straight wins in the long-season traveling championship. 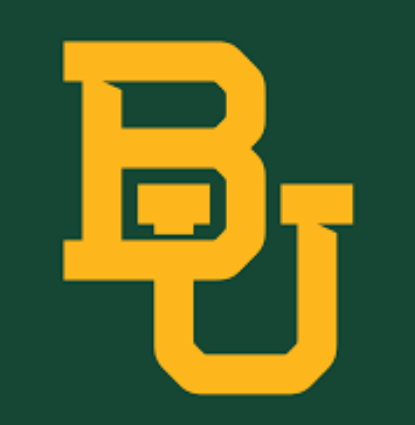 The long season version of the women's college basketball traveling championship followed the path of the country's top teams in 2018-19.

It began with Notre Dame, which won the national championship in 2018 after claiming its second traveling title, the most of any team. The Irish held the championship for their first seven games of 2018-19 before taking their top ranking against Connecticut, the perennial power. Connecticut won the game, 89-71, at Notre Dame, for its second title earned on the floor, which tied the Irish.

Of course, UConn already had 103 all-time victories from this championship in its pocket and added five more before putting its top ranking on the line at Baylor, which was ranked eighth nationally. But Baylor actually was better than that, first claiming a 68-57 win against UConn to take over the long (and short) titles, then winning all the way through to the NCAA championship, a total run of 28 games.

Baylor will take the championship to the 2019-2020 season with those wins. It's still far short of UConn, which now has 103 wins. But it is a long way ahead of third-place Notre Dame (11), fourth-place South Carolina (six) or the only other team with a win, Mississippi State (one). 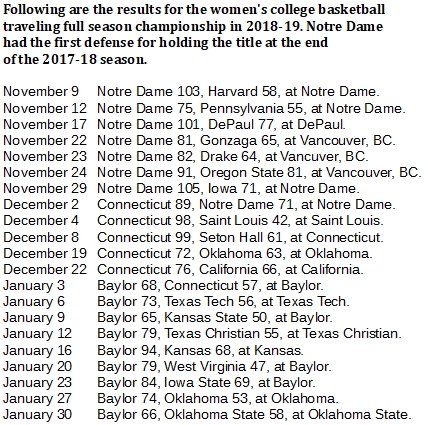 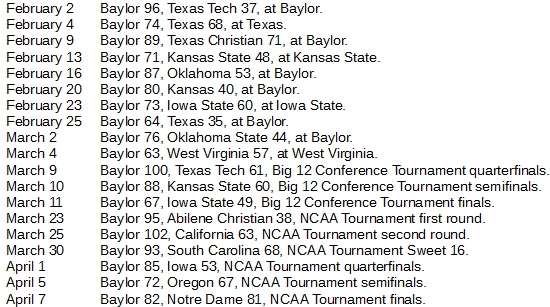