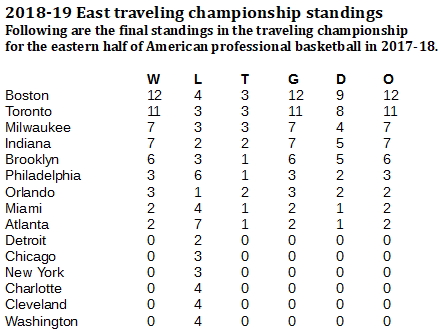 A 10-game title streak in January and February enabled the Boston Celtics to become the fourth Eastern pro basketball traveling champion in four years and brought them into the all-time hunt through the 2018-19 season.

The Celtics brought the title into the season and defended it once before losing, 113-101, in Toronto on Oct. 19. The Celtics would pay Toronto back later. The Raptors couldn't defend the title they won against Boston, but they added titles of four and six games to their achievements and led the standings with the six-game streak riding into Boston on Jan. 16.

At that point, the Raptors held 11 games of championship, no one else had more than six and the Celtics had two. But they added to it with their 117-108 win against Toronto, then defended it 10 times to take the lead before falling, 98-97, at Milwaukee, on Feb. 21. The Bucks then defended the championship three times into mid-March.

With their championship for the season, the Celtics climbed into an all-time race that is wide open after four years. Toronto, which led this championship in 2017-18, is the all-time leader with 28 games of title. Indiana has never been a contender at the top, but the Pacers are steady every year in this hunt and now are in second place with 27 games.

Miami, which won these proceedings in their inaugural year of 2015-16, is third all-time with 25 wins. Boston is fourth with 19, followed by Chicago and Milwaukee, each with 16. 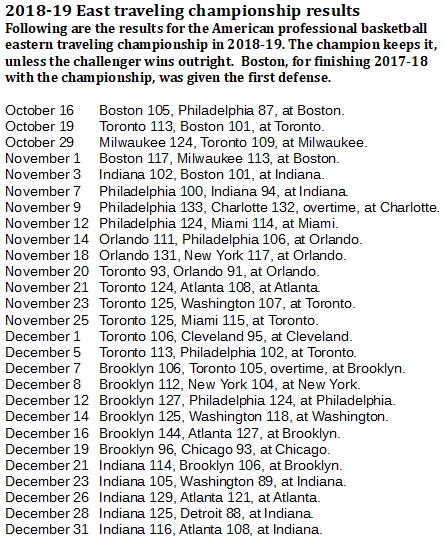 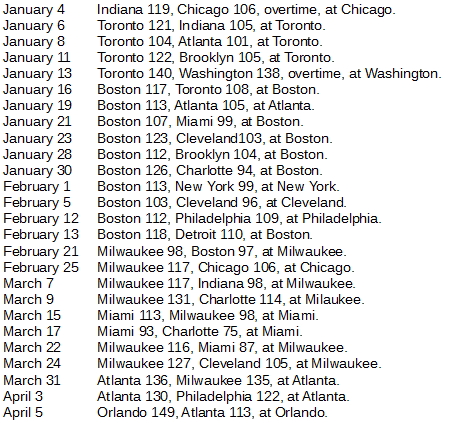