Club América and Cruz Azul were the dominant clubs across the Mexican traveling championship in 2017-18, with Club América moving to the all-time lead in the standings. 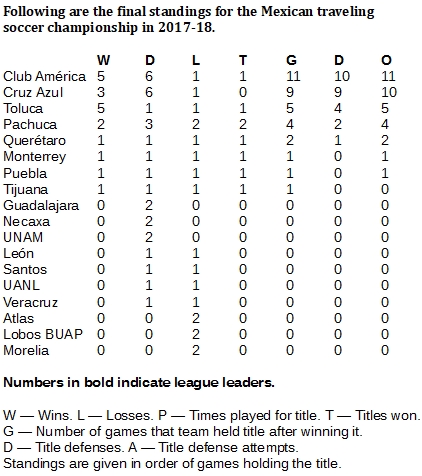 It took three years to get there, but Club América finally reached the top of the all-time standings for the Mexico traveling soccer championship with a vigorous run through 10 title defenses at the start of 2018.

These Millionaires of Mexico City captured the championship from Querétaro with a 1-0 road victory on Jan. 7 and didn't let go until March 17, when they fell, 2-1, at home against Toluca. That streak put América ahead of Cruz Azul, which brought the title into the season and defended it nine times before a blowout loss, 4-0, at Pachuca on Sept. 27.

So, Club America, the team with more domestic league titles, more FIFA recognized club trophies and more of just about anything else than any other club in Mexico, finally reached the top of the traveling championship, and did so grandly, moving to the top of the all-time table just when it won its first season title.

For the season, América compiled 11 games of title, ahead of Cruz Azul's nine. Toluca and Pachuca, which led a wide-open debut season in 2015-16, came in next with five and four, respectively.

All-time, América now has 16 games of title, followed by 13 each for Cruz Azul, Léon and UNAM. The latter two clubs dominated in 2016-17, but neither won a traveling championship in 2017-18. Toluca is fourth all-time with 11 titles, followed by nine for Pachuca. 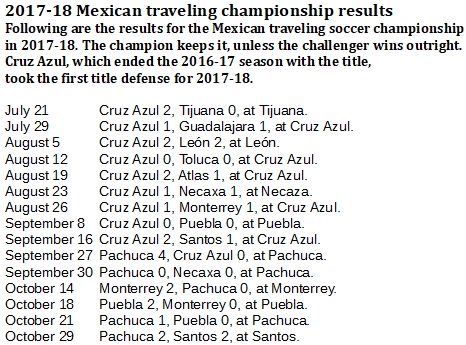 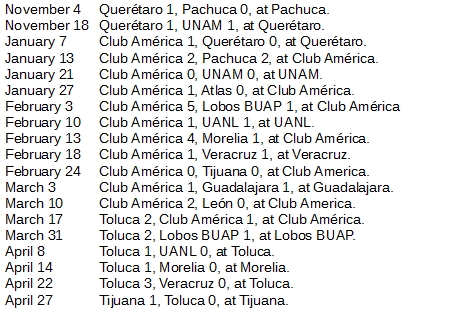