The first pyramid for the top level of European pro basketball in 2018-19 produced at least one unsurprising result. The permanent clubs did pretty well. 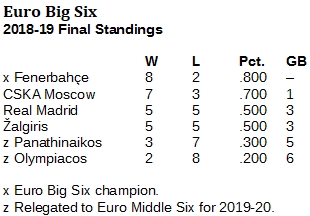 One thing the world has shown us is that there are many ways to run an athletic league.

In the United States and Canada, the permanent franchise system is in play. The teams in the top leagues are there permanently, unless they just go out of business. The advantage is that the league can play to the strongest markets every year. The disadvantage is that dog teams are coddled to maximize those markets. The teams in the top leagues aren't necessarily there on competitive merit, though their market advantages certainly make them better than other teams.

In most of the world, particularly in Europe, they use the pyramid system, in which the worst teams at the top level are relegated to the next level down, while the best teams at that level come up to replace the clubs that were relegated. The downside is that teams could end up in the top league while playing in markets that aren't quite major league scale. The upside is that one never hears nonsense about tanking for the top draft choice. There is no reward for tanking. It is something of a death sentence. You're out of the league.

The Euroleague gives us something a little different, a mix of permanent teams and teams from the pyramid.

But it is a mix. Of the 18 clubs, 11 are permanently licensed to compete in the Euroleague, two others are granted two-year licenses, one is the EuroCup champion and three are the champions of various top-level domestic leagues: The ABA (Adriatic Basketball League) First Division, the German Bundesliga and the VTB League of top clubs from Russia and neighboring countries.

One other spot goes to the best team in the Asociación de Clubs de Baloncesto (ACB) that isn't permanently licensed in the Euroleague. ACB, the top Spanish League, includes three permanent Euroleague clubs – Barcelona, Baskonia and Real Madrid. In 63 years of ABC or its predecessor, Liga Nacional, one of those three clubs has won it 56 times. But one of the unlicensed clubs might be good enough to win the EuroCup. When that happens, then ACB's unlicensed spot becomes a continental wild card.

It becomes really confusing when this publication gets involved and tries to make a pyramid out of it. Perhaps we can explain it as we go along.

We look at the first year of the Europyramid, 2018-19, for some help. First, we took the 2017-18 standings and just split the Euroleague into three divisions, with the top six clubs in the Big Six, the next six clubs in the Middle Six and the lower clubs in the Little Six(ish).

The clubs we see in the Big Six are no surprise. All of them are permanently licensed to the Euroleague. The winner here in 2018-19 was Fenerbahçe, the power from Istanbul, followed by CSKA Moscow, the top-ranked club in Europe. The two clubs being relegated for 2019-20 are the Grecian clubs, Olympiacos and Panathinaikos.

Now we look at the Middle Six and it gets a little complex down the standings. The top two clubs, which will be promoted, are permanent licensees – Baskonia and Maccabi Tel Aviv. Easy enough. 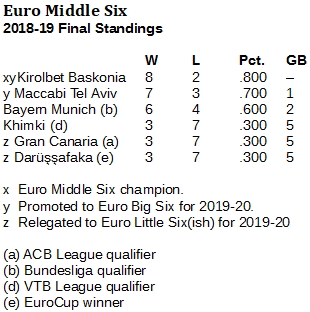 Ordinarily, the spot established by Brose Bramberg and solidified by Bayern Munich would be passed on in 2019-20 to the winner of the previous year's Bundesliga. But it happens that Bayern Munich is one of the clubs granted a two-year license. And, it happens, the club that won the Bundesliga was Bayern Munich. Thus, the new German entry, Alba Berlin, will enter the pyramid at the bottom level and Bayern Munich will remain in the Middle Six. 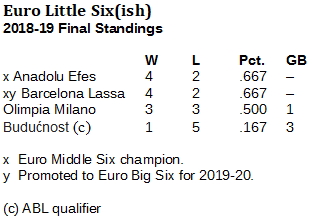 Gran Canaria and Darüşşafaka both are going to the Little Six in 2019-20, but not really. The Gran Canaria spot is for the club placing highest in the ACB that isn't otherwise licensed. However, it turned out that the team for this spot in 2019-20, Valencia Basket, won the EuroCup and qualified that way.

So, the Euroleague turned the final ACB spot into a wild card and awarded it to Zenit St. Petersburg of the VTB League.

Either way, the final team from Spain and the EuroCup winner both were going to the Little Six.  Who is going up? It's two permanently licensed Euroleague clubs, Barcelona and Anadolu Efes, both of which finished 4-2 in a four-team Little Six(ish). In 2019-20, the Little Six really will have six clubs. The two new clubs are Alba Berlin and a French club, ASVEL, which received the second two-year license.

One of the two holdovers in the Little Six is Olimpia Milan, which is a permanently licensed club. The other will be the ABA representative, Cevena zvezda from Belgrade, which will take up where the previous year's ABA champ, Budućnost, left it. The bottom division.