Napoli posted a championship streak just longer than the previous record by Juventus with the Italian traveling soccer championship. But Juve snapped the streak, then began one of its own. The game of the year for the Italian traveling soccer championship in 2017-18 took place on Dec. 1, Juventus at Napoli.

Juventus began these proceedings as the caretaker champion in 2015-16 and tore off 25 straight defenses. That stood to be the record title streak for a long time.

But Napoli picked up the championship with a 2-1 win at AS Roma on March 4, 2017, and held onto it for 11 defenses, a total of 12 games with the championship. The Neapolitans then took the title to the start of the 2017-18 season and worked up 14 more defenses, bringing their streak to 26 games, one better than the record held by Juventus.

It happened, then, that Napoli put its 26-game title streak on the line against Juventus on Dec. 1, and Juventus made sure it would go no longer. Juve posted a 1-0 win in Naples and then tacked up 18 straight defenses, going all the way through the Serie A rotation before meeting Napoli again, this time at Juventus, on April 22.

The Naps won that one, 1-0, ending the 19-game streak for Juventus. But Napoli immediately lost the championship in a 3-0 decision at Fiorentina on April 29, so a rebound streak was not to be.

Three years into this exercise, Juventus is the runaway all-time traveling champion in Italy, holding the title for 49 games. Napoli occupies a distant second place with 26. AS Roma is an even more distant third place with nine games of title. 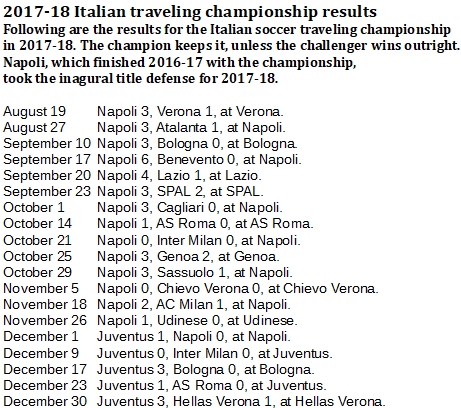 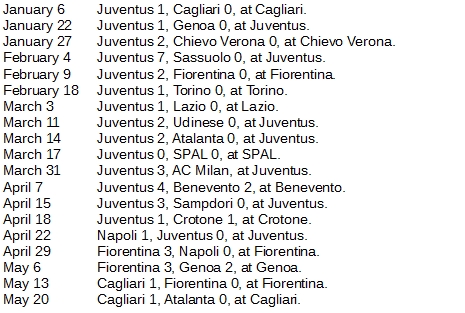