The last two charter members of the women's pro basketball First Division, the Minnesota Lynx and the New York Liberty, are on their way out after posting losing records at the top tier in 2018. 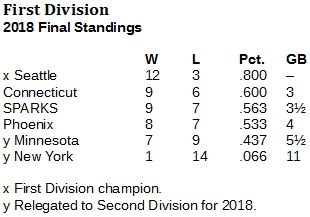 It only took three years to demote the last original members from the First Division in women's pro basketball. At two demotions per year from a six-team division, that's the minimum time.

The Minnesota Lynx and New York Liberty, the last two charter members of the First Division in 2016, finished in the bottom two in 2018 for demotion to the Second Division in 2019.

In 2018, New York fell off disastrously, finishing 1-14 in the top tier. Minnesota entered August 7-5 in the top division, but dropped its last four games to fall into the relegation zone.

Seattle won the top division for the first time, following the Lynx and Sparks as division champions. Finishing 12-3, the Storm ended a full three games ahead of second-place Connecticut. 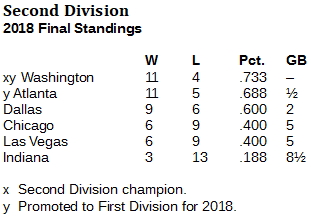 The Washington Mystics, who won the traveling championship in 2018, also won the Second Division at 11-4, barely ahead of the 11-5 Atlanta Dream. The Mystics and the Dream will replace Minnesota and New York in the First Division for 2019.