The South American traveling soccer championship could get around a bit in 2019-20, but it spent all of 2018-19 in Argentina. 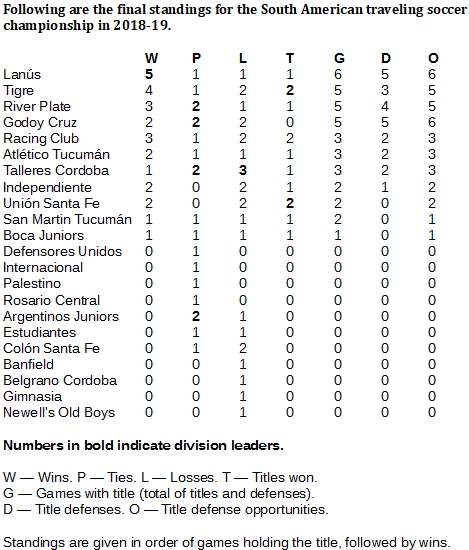 In South America, the traveling soccer championship somehow hasn't been given much chance to stretch out and check the scenery.

Three years in and the title has resided for about two-thirds of the time in Argentina and the other third in Venezuela. Argentina and Venezuela both are terrific athletic countries, but so are places like Brazil, Columbia and Uruguay, particularly in soccer, and those territories haven't yet been touched.

A good chance exists, though, that the traveler could get around a bit in 2019-20. It does happen that the prize is in Argentina, for good reason. The Superliga still has four teams alive in South American competition entering the new season. In the secondary cup, the Copa Sudamericana, Independiente and Colon Santa Fe still are alive in the quarterfinals. In the big one, the Copa Libertadores, River Plate and Boca Juniors are alive in the quarterfinals.

The other South American nations with clubs still playing are Ecuador, Paraguay, Venezuela and, in a huge way, Brazil.

In the Copa Libertadores, one entire side of the quarterfinal bracket is Brazilian, meaning one of either Grêmio, Palmeiras, Flamengo or Internacional will be in the final. River Plate and Boca Juniors are on the other side of the bracket, along with Cerro Porteno of Paraguay and LDU Quito of Ecuador.

In the Copa Sudamericana, the possibility exists of an all-Argentine final between Independiente and Colon Santa Fe. But the possibility of an all-Brazilian final also exists with Corinthians and Fluminense on one side of the bracket and Atlético Mineiro on the other.

So, a good chance remains that the traveling championship actually will get around South America this year. We'll see.

As to the 2018-19 season, the whole affair took place in Argentina, and that makes it interesting to compare this table with the Superliga table from the same year.

In the traveling championship, Lanus led everyone with six games, followed by Tigre, River Plate and Godoy Cruz with five each. In the 26-team Superliga, those clubs finished 11th, ninth, fourth and 14th, respectively.

The five games for River Plate come in handy for extending that club's total for three years to 15, the most in South America. Godoy Cruz is second with 10, Estudiantes de Mérida of Venezuela is third with nine, Talleres Cordoba is fourth with eight. 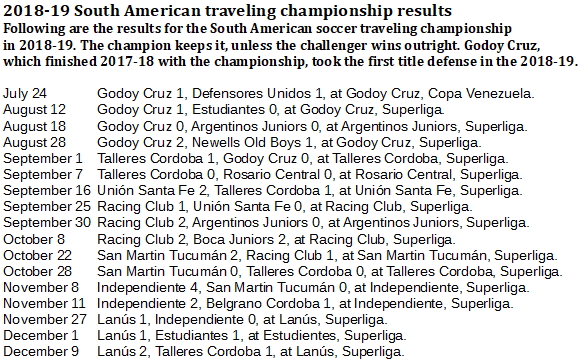 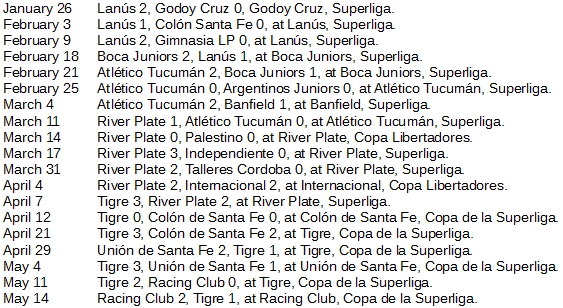