The University of Connecticut women's basketball team didn't quite make it to 100 straight games with the short version of the national traveling championship. Baylor saw to that in 2018-19.

Probably no team in any sport will hold a traveling championship for long enough to catch this all-time record. The second-longest streak also belongs to the UConn women's basketball team, a 73-game run that lasted almost two full years and ended in the 2017 NCAA Tournament semifinals.

UConn began the 2018-19 season with an impressive run of wins, not the least of which was an 89-71  win at top-ranked Notre Dame on Dec. 2, unifying the long and short women's basketball traveling titles. Notre Dame had taken the long season championship from Connecticut in the 2018 NCAA Tournament semifinals.

But the Huskies lasted only a month before venturing into Waco, TX, for a meeting with the Baylor Bears. Top-ranked at the moment UConn fell, 68-57, to eighth-rated Baylor. That set Baylor on a path to 19 straight victories as they won out to finish the regular season.

So, UConn is on top of the all-time standings with 97 wins. Baylor, the only other team to win this championship in four years, is second with 19. 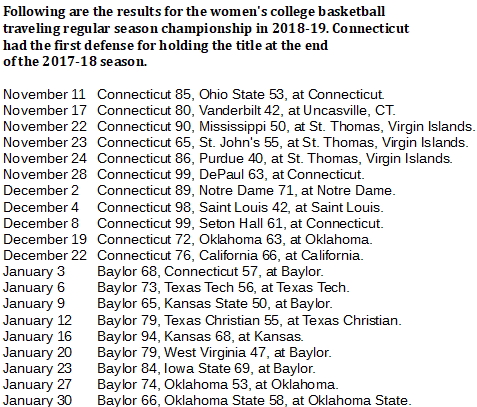