The African traveling championship will start the 2019-20 season in Mozambique, and the chances of it getting around much are slim. 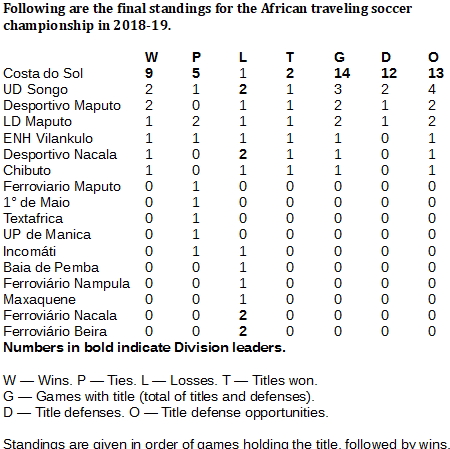 The African traveling soccer championship spent all of 2018-19 in Mozambique and now has spent roughly half of its three-year history there after spending the first half of it in South Africa.

So, the African championship has been to only two nations in three years, only changing countries once, making it the least traveled of the traveling continental soccer championships.

We're only two years into Oceana and that one has never left New Zealand, but Oceana isn't really a continent so much as a smack of islands, especially with Australia packed off to Asia by FIFA mapping.

The South American traveling championship has been around for three years, touching only two countries, Argentina and Venezuela. But it has changed countries twice.

The Asian championship is three years old and it has been to three nations – South Korea twice, plus China and Japan once each. It also has been to the Korean second division.

The world championship has traveled the most of all, reaching Italy and Spain three times each, plus England, Russia and France once each – five nations and nine home countries in three years.

All of this raises questions about the African championship's travel prospects. The short answer is that it all depends on UD Songo, the only team in Mozambique ticketed for international play this season.

The problem is that Mozambique doesn't often send clubs to international competition in recent years, and it's not because the clubs aren't good enough. In fact, Mozambique in recent years hasn't sent its full allotments to the major African competitions – the Champions League and, secondarily, the Confederations Cup. That might be somewhat why the Moçambola has only one team playing in Africa this year.

Songo begins play in the Confederations cup this month with two legs against a Tanzanian club, Simba. If Songo gets past that, then it's two legs in September against the winner of a preliminary round pairing between Nyassa Big Bullets from Malawi and FC Platinum from Zimbabwe.

For any of those games to have a bearing on the African traveling title, of course, Songo would have to get its hands on it, first.

The present titleholder is Costa do Sol, a worthy champion that first took the prize from a South African club, Cape Town City, in the Confederations Cup on March 18, 2018. But Costa do Sol could not defend the championship and UD Songo took it three months later, finishing the 2018-19 campaign with seven straight games of championship.

Costa do Sol took the title back at the start of September 2018 and held on for a total of 13 games, easily the longest streak in the three-year history of this championship. Costa do Sol ended the season with 14 games of championship, easily ahead of second-place Songo, which had only three.

With 15 games of championship historically, Costa do Sol has the all-time lead in Africa, ahead of Mamelodi Sundowns of South Africa, who have 11. 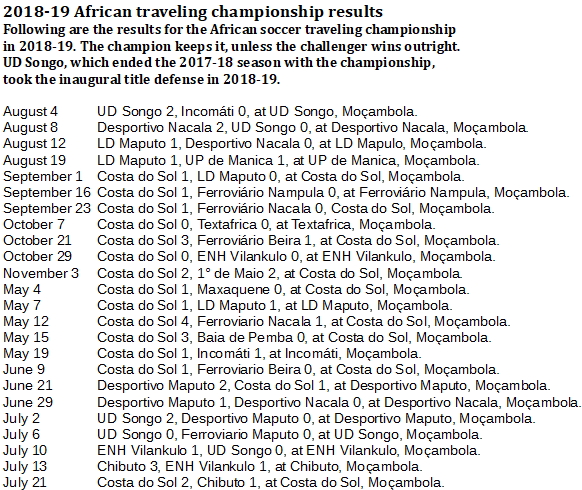