Golden State won its third Western traveling pro basketball season title in 2018-19, but the race this time was closer than ever. 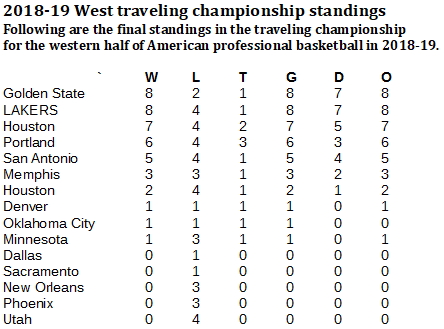 Golden State won the western traveling championship in pro basketball for the third year out of four in 2018-19, but the race was tighter than ever.

The Warriors and the Lakers both finished with eight wins, tied at the top. Golden State prevails for being 8-2 in its western traveler games, compared with 8-4 for the Lakers.

But the season was a big step up for the Lakers, who were 0-4 in western traveler games through 2017-18, then they lost the season opener at Portland. But the Lakers took the championship from Portland with a 114-110 road win on Nov. 3 and defended it seven times.

Houston, Portland and San Antonio all were right in this thick race, finishing with seven, six and five wins, respectively.

Golden State still leads these standings all-time with 46 wins after starting these proceedings with 22 wins as the provisional champion in 2015-16. San Antonio occupies a far distant second place with 19 wins all-time, followed by Oklahoma City with 16. 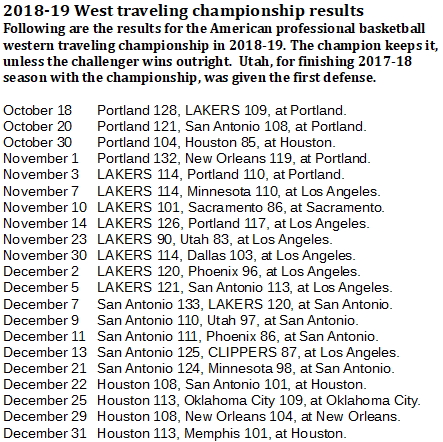 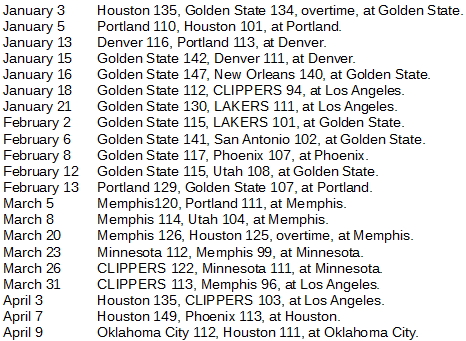