The Washington Mystics came from nowhere in 2018 to capture 10 games of traveling championship, the most in women's pro basketball for the year. 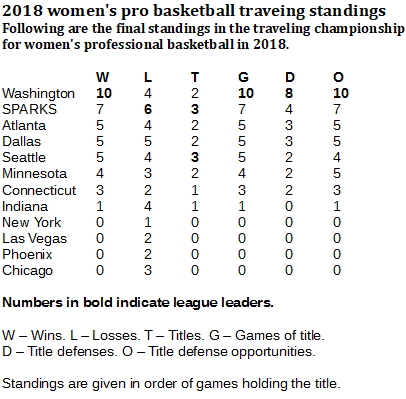 The Washington Mystics were a non-entity in the women's pro basketball traveling championship, until July 31, 2018.

Then, suddenly, the Mystics became all but unstoppable, starting with an 86-71 win at Atlanta to capture the title for the first time of the year and only the second time in the three years of the competition. The Mystics were only 1-9 all-time playing for the traveling title before that game in Atlanta. But they immediately ripped out seven defenses before losing it on the road on Aug. 19 against the Minnesota Lynx, the top traveling team in each of the first two years.

The Lynx immediately lost their title to the Sparks in the first round of the WNBA playoffs, but the Sparks lost it to the Mystics in the next round (each playoff round counts as one game in this reckoning). Washington lasted through the semifinals before losing in the league championship round against the Seattle Storm.

Washington finished on top of the standings for the year with 10 games of championship, ahead of the Sparks, who finished with seven. The Lynx still lead the all-time standings with 32 wins, followed by the Sparks with 19. Atlanta, Dallas, New York and Chicago all are tied for third with nine. 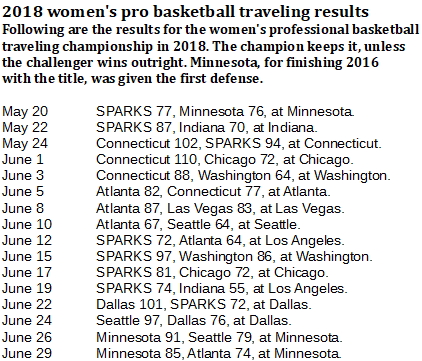 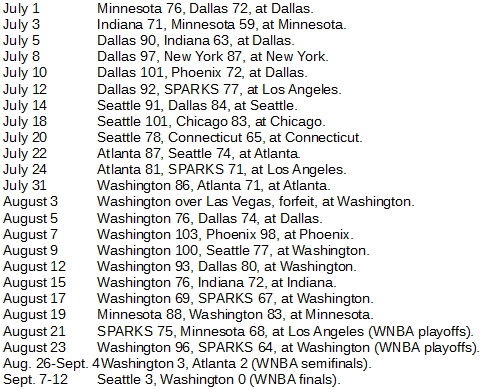