The oncoming Elite Division jacked up the stakes around the pro basketball ordinals in 2018-19, but even without it, the Toronto Raptors and Oklahoma City Thunder produced a percentage-points finish for the First Division championship. 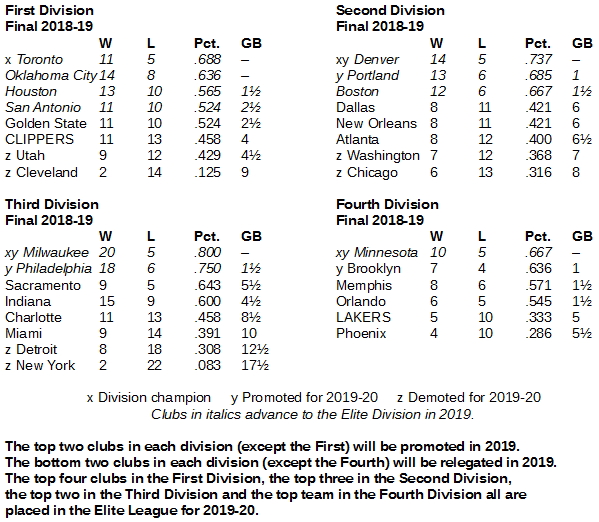 The establishment of an Elite League for 2019-20, something along the lines of the main continental soccer championships, made the ordinal pyramid in professional basketball quite more thick in 2018-19, especially in the top division.

The elite league will be stocked in the same way that the similar leagues are stocked in North American baseball and hockey. The top four teams in the First Division from the previous year will be entered, as will the top three teams from the Second Division, the top two teams from the Third Division and the top team from the Fourth Division. Traveling champions also will qualify, if they haven't qualified in the pyramid.

In 2018-19, that led to a meaningful race for fourth place in the First Division. The race at the top finished tight, but really wasn't so much at the end.

Toronto and Oklahoma City were the best teams, tied in the games column. Toronto prevailed on percentage points, finishing 11-5 (.688) to 14-8 (.636) for the Thunder. The Raptors clinched it with a 123-114 overtime win at Oklahoma City on March 20, putting their record at 11-4 and OKC at 12-8. That guaranteed that Toronto would finish with the best percentage and no worse for tied on top in the games column. Turned out that OKC went to Toronto and won two days later, then finished with a win against Houston.

Down the standings a way, we had a logjam. As of March 15, Houston held third place at 10-10, followed by San Antonio and Golden State at 8-9 and the Clippers at 9-11. Two of those teams would go to the Elite League.

At 9-11, Utah still had a chance, but the Jazz was the seventh-place team and had the additional concern to avoid relegation. And they only had one First Division game left, anyway, against the Clippers on the final day of the season.

Down the backstretch, Houston went 3-0 to finish comfortably in third place. The Spurs and Warriors both were 3-1 in the last three weeks of the season. However, the Golden State loss and one of the San Antonio wins proved decisive, as the Spurs beat Golden State, 111-105, in San Antonio on March 18. The Clippers couldn't keep up, going 2-2 down the stretch.

When the smoke cleared, the Spurs and Warriors were tied for fourth place at 11-10 in the First Division. But the tiebreaker went to the Spurs for going 2-1 head-to-head against Golden State, crucially because of their March 18 victory.

The Second Division produced a tight race for promotion. Denver won it at 14-5, followed by Portland at 13-6. Boston finished one-half game behind promotional status, but will enter the Elite Division in 2019-20, as will Denver and Portland. At the bottom, Washington and Chicago are going down to the Third Division, but Atlanta, Dallas and New Orleans barely survived.

There was no contest in the Third Division. Philadelphia and Milwaukee clearly were the best two teams, so they will be promoted in 2019-20 to the Second Division and the Elite Division. At the bottom of this group, New York was notably terrible at 2-22. Detroit will join the Knicks in the Fourth Division in 2019-20.