Major League Rugby came into our world for the Spring of 2018. It made us look at the traveling championship a lot differently, simply because it forced a different way to establish the titleholder. 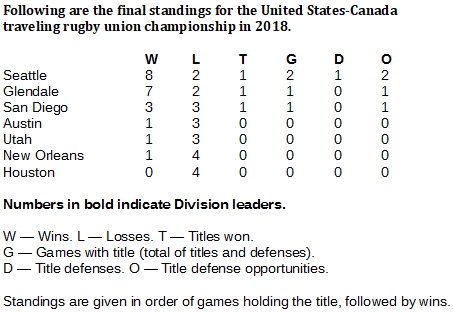 Major League Rugby, an enterprise of some of the more prosperous rugby clubs across the United States, came to us in 2018. Great. A new league. Let's have a traveling championship.

But here's where a new league presents a problem. Where do we start? Every other time we've launched a traveling championship, we just gave it to the league's defending champion for safekeeping. It's a reasonable place to begin. But we can't begin that way with Major League Rugby. There is no defending champion.

There is only one fair and appropriate way to do this. Give every team its fair share of the championship, and just begin from there applying the iterating principle and Vedic prayer beneath the traveling championship: the team that beats the team becomes the team.

The league began with seven clubs, so it didn't figure to take very long before all of the shares were consolidated with one team. It took until Week 9, when the Glendale Raptors took down the Seattle Seawolves, 33-11, at Glendale, on June 16.

The list right below demonstrates the playdown from every team having one share of the championship to one team having all of them. The first game ever played in the league was New Orleans at Houston on April 21. Each team entered the game with one share of the championship. The league began with seven teams, so there are seven shares out there to start, one for each team.

New Orleans won the game, so came out of it with the share it took in, plus Houston's share, for a total of two shares. Hence, the number "2" in parenthesis next to New Orleans' name in the scoreline. Houston came out of the game losing the share it entered.

A pivotal result in the early going issued from the first meeting between Glendale and Seattle, on April 28 in Seattle. Glendale won that game, as well, 19-15, and now had four shares, because both clubs entered with two. Seattle came out empty-handed.

Seattle and Glendale, the only two teams with shares by late May, both kept winning for a couple of weeks before they met on June 16, the day when Glendale consolidated all of the traveling championship shares under its flag with a victory.

Glendale lost only one game during the regular season. Once anointing themselves as the conquering traveling champions of the new rugby league, the Raptors relinquished it the very next game, a 23-5 loss at San Diego on the final day of the schedule. Seattle's only two regular-season losses were the boildown losses to Glendale.

Seattle got right back in the game, though, defeating San Diego, 38-24, during the first round of the league playoffs, the semifinals. It would figure that the team Seattle would face in the championship would be Glendale. It was, but Seattle won this time, ending the first season of Major League Rugby with the league championship and the North American traveling championship.