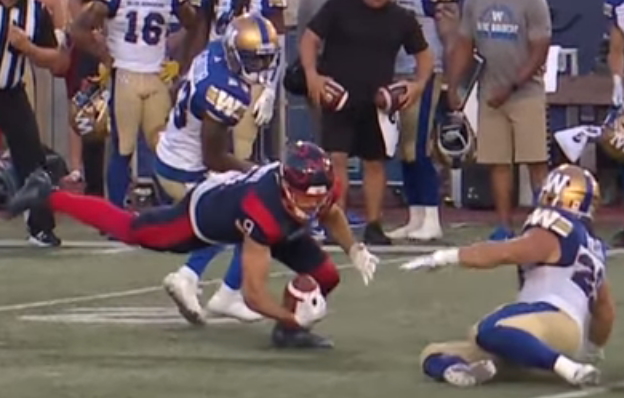 Jake Wieneke goes to the ground hauling in a pass for the Montreal Alouettes as they rallied with three fourth-quarter touchdowns for a 38-37 win against the Winnipeg Blue Bombers on Sept. 21 to capture the Canadian traveling football championship (LA Big Leagues screen capture).

The traveling championship across Canadian football has cooked up a wide-open race for season honors with five weeks remaining on the schedule.

The month of September, in particular, has been topsy-turvy. On Sept. 1, the Saskatchewan Roughriders beat the Winnipeg Blue Bombers, 19-17, with a last-second field goal, producing their fourth straight win for the title and bringing themselves up to a tie for the year with the Bombers at four games of championship. But when the same two teams met again six days later in Winnipeg, the Bombers chalked up an easy 35-10 win, putting themselves back on top of the season race with five games of title.

Two weeks later, the Bombers crossed country to visit the Montreal Alouettes, who scored 21 unanswered points on three touchdown passes by quarterback Vernon Adams to capture the championship with a 38-37 win. 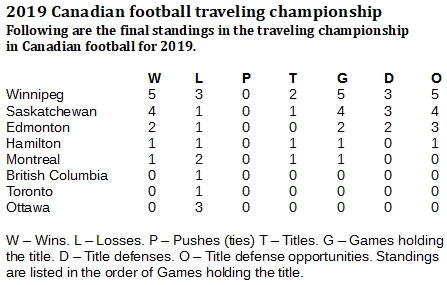 The season championship still can go in numerous directions. Winnipeg has the lead with five games, followed by Saskatchewan with four and Edmonton with two. Of course, Montreal can take the lead and win the season with five defenses.

All-time, Edmonton has extended its lead with 15 games of Canadian championship, while Winnipeg has moved up to second place with 10. Calgary, which began the season in second place with nine games, somehow hasn't had a crack at the title in 2019 even though the championship has spent all but two weeks in the Western Division. 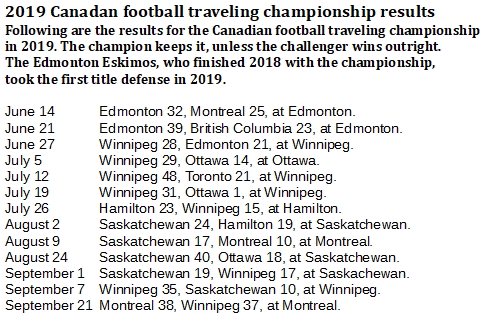