For the second year in as many as we have run the Spanish inner pyramid, Barcelona emerged as the winner. But it was a bit more difficult for Barça, which won the division despite winning fewer than half of its games. 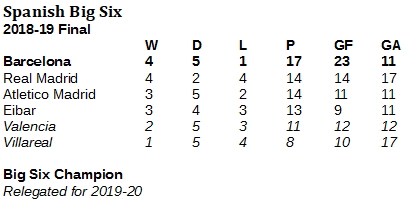 The difficulty of the Spanish Big Six is difficult to overstate. Two years in, only one team has managed to win half of its 10 games in a season.

That would have been Barcelona, which bagged seven wins and three draws in 2017-18 to win the Spanish Big Six with 24 points, nearly twice as many as second-place Real Madrid and Atlético Madrid.

Barcelona won the Spanish Big Six again in 2018-19, but not nearly so easily. This time, Barça only won four games and actually lost one, finishing with 17 points in the standings. This time, Real Madrid and Atlético Madrid finished much closer in second, each with 14 points. 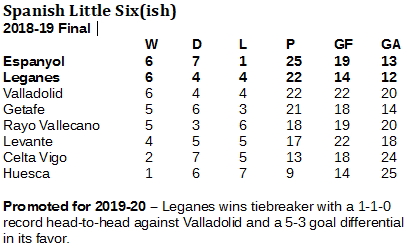