The Crusaders, carrying the hopes of rugby union fandom throughout Christchurch, NZ, broke a late tie for the Southern Hemisphere traveling championship with the Hurricanes, who represent the rival city of Wellington, NZ. 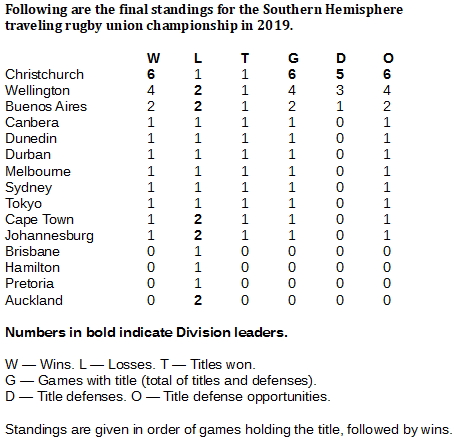 Sadly, we never get to see how these Southern Hemisphere clubs hold up against their European counterparts, for there is no world club rugby union competition. At this publishing, the rugby World Cup is starting, but that's a competition of national teams. A few stabs were taken at a club world championship around the 1980s, before rugby union went pro, but they weren't comprehensive and nothing has been tried in 30 years.

The Crusaders, from Christchurch, won Super Rugby in 2018, so they took the first title defense in this new enterprise and succeeded four times before succumbing to the home-standing Waratahs in Sydney, 20-12, on March 23.

For more than two months thence, a period of 10 games through June 1, the title changed hands nine times, going to nine different clubs. Only Jaguares, from Buenos Aires, made even a single defense.

But the Hurricanes, from Wellington, took the championship with an emphatic 30-17 road win against the Sharks, of Durban, then produced three title defenses, bringing themselves to a tie with Christchurch on top of the season traveling table entering the playoff semifinals in late June.

Right on cue, the bracket directed the Hurricanes to Christchurch for their next game, the semifinal, to break the tie. The Crusaders claimed a 30-26 victory to break that tie, then won their final game of the season, the Super Rugby Final, 19-3, in Christchurch against Jaguares. With that, Christchurch finished the year with six games of title, compared with four for Wellington. 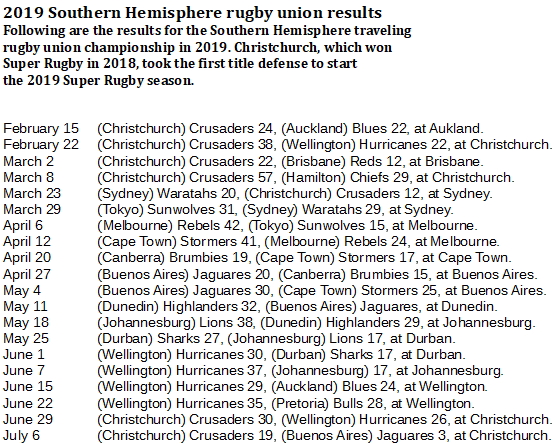