Cruz Azul set several single-season marks with the Mexican traveling soccer championship in 2018-19, moving to the top of the all-time standings. 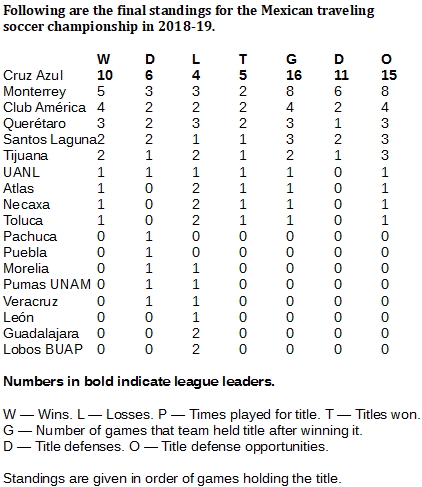 Most countries run their domestic top-level soccer seasons pretty much the same way. But Mexico isn't most countries.

Anywhere else, you're getting a straight double round-robin regular season without playoffs. But Mexico gives you, instead, two distinct single round-robin seasons, each with its own playoffs.

Because the spirit of all this was originally to juice the regular season, playoffs are included in only a very few of these domestic traveling championships around the world, generally because of special circumstances. But Mexico, with its set of playoffs in the middle of the season, gives us options.

In the first year of tracking Mexico, 2015-16, the idea was to end tracking at the end of the regular season, but include the playoffs that happen before then. So, the Apertura playoffs are included, but the Clausura playoffs are not. In the next two years, we left out playoffs altogether.

Starting with 2018-19, though, the decision was made to include all of the playoffs. It's a little strange because the playoffs are double-legged, but strangeness doesn't scare us. If your head's together, it's kind of fun. One strange feature of the double-legged playoffs is that the team coming out with the traveling championship might not be the team that advances in the playoffs. And vice versa.

It was a fitting way to end the season. Cruz Azul won the Mexican traveling soccer championship early and often in 2018-19, a record-smashing season for the Cement Locomotive.

The Blue finished the year with 10 wins, 16 games of title and five championships, setting single-season marks for the four-year-old Mexican competition in all three columns. Even its totals not including the playoffs would have set those records.

All-time, Cruz Azul now leads all clubs with 28 games of title, scorching past Club América, which now is second with 20. UANL is third with 14 games, followed by Toluca and León, each with 13. 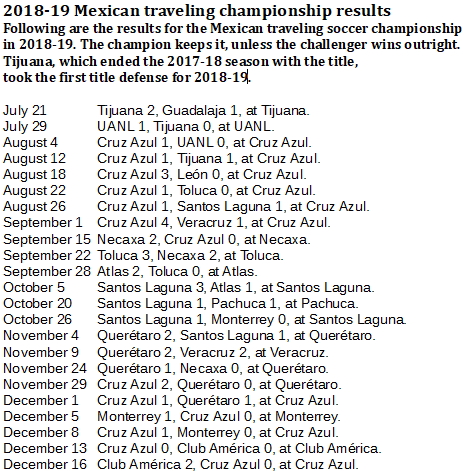 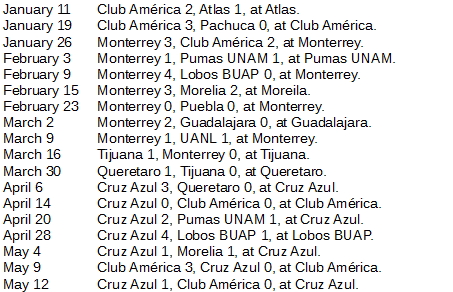